Keeping his cool is something that Carlo Ancelotti has done throughout his distinguished coaching career to ride out the storm. The way that he’s maintained a dignified calm during a turbulent season at Chelsea harks back to his early coaching career in Serie A.

In 1999 when he was appointed as manager of Juventus, he arrived at the Stadio delle Alpi in Turin to a banner which read: ‘A Pig Must Not Coach Juventus’. The fans were angry that a former AC Milan and Roma player was about to take over.

It was also a personal dig because the food-loving former midfielder had piled on the pounds since retiring – as a Milan player – seven years earlier.

At a tense media conference where local and national journalists were licking their lips, the poker-faced Ancelotti deadpanned: “The lack of respect was intolerable. How can you talk about a pig like that?”

At Chelsea, Ancelotti has diffused potentially explosive situations with the same kind of expert people skills.

Last month when Chelsea were eliminated from the Champions League by arch-rivals Manchester United, the 51-year-old placidly responded that it would “not be a problem” if he were sacked at the end of the season, while adding that he “could do better”.

Ancelotti played a similarly straight bat in the wake of powder-keg questions about the sacking of his assistant Ray Wilkins last November and the failure of £50 million ($80 million) striker Fernando Torres to spark since his January signing.

At no point, did he fall into the old trap of playing the ‘blame game’, however disruptive the abrupt dismissal of his number-two or the addition of an out-of-form Spanish international must have been.

Mid-season, Ancelotti was forced to immediately change his tactical approach, switching between 4-4-2 and 4-3-3 formations in a bid to fit Torres in. Mercifully, the other transfer-window arrival, David Luiz, slotted smoothly into the Blues’ back four.

Player power, with the likes of John Terry, Frank Lampard and Didier Drogba dictating terms, has contributed to the demise of previous coaches at Stamford Bridge. But, clearly, Ancelotti continues to earn the respect of the dressing room.

Of course, Drogba, Torres and Salomon Kalou have all shown that they are less than happy about either starting on the bench or being substituted. Yet it’s hard to imagine many other managers in the sport who could better handle so many considerable egos in the same squad.

Back in September when I interviewed Ancelotti at Chelsea’s Surrey training base as the defending champions sat top of the table, he remarked at how the pressure in the Premier League paled in comparison to the goldfish bowl world of Serie A.

One wonders if the ex-AC Milan manager would still hold the same opinion.

After Wilkins’ sacking, it seemed that Stamford Bridge was falling down. A rash of injuries exposed a surprisingly skinny squad and a number of key players lost form at the same time as Chelsea slumped to fifth.

Once again, Ancelotti has missed out on any season coaching awards. But the fact that he was able to lift Chelsea from 15 points behind Manchester United barely two months ago to title contenders again, amidst all the turmoil, speak wonders for his man-management skills.

“Ancelotti showed no panic at any moment which is a great skill for any manager,” said Bojan Hodak, Croatian-born head coach of Cambodian club, Phnom Penh Crown.

“His strength is that he is always very consistent and persistent in his behaviour.”

His failure to win the Champions League for the second straight year means that Ancelotti may still leave Chelsea at the end of the season.

This week, Manchester City were added to the list of possible suitors as the big-spenders face up to the prospect of playing on the main European stage next season.

Despite guiding Man City to fourth place and their first FA Cup final in 30 years, Roberto Mancini has been widely criticised for his negative style of play and is not even guaranteed his job for the 2011-2012 season.

The more attacking Ancelotti might be a revelation at Eastlands.

“I don’t think Ancelotti will stay at Chelsea next season because it’s very clear that the Champions League is the target of owner Roman Abramovich,” Hodak said.

“Ancelotti will always be in demand because he is one of the top coaches in the world, level with Mourinho, Sir Alex and Guardiola.”

The pull to return to management in Italy is also strong, given his fondness for Roma where he played 171 games over eight years, winning the 1983 Serie A title and four Coppa Italias.

And Ancelotti would also seem a ready-made replacement at Real Madrid should Jose Mourinho’s tenure be cut short at the Santiago Bernabeu stadium. He has never played or coached at a Spanish club. Certainly, his cerebral approach would be a dramatic change in style after the theatrical Portuguese.

“His calmness is a strength but sometimes it can be a weakness,” Hodak, who’s also coached or played in Hong Kong, Malaysia and Singapore.

“On occasions, he needs to be more aggressive and even get mad like Sir Alex to motivate the players.”

If Ancelotti leaves at the season’s end, it would mark Chelsea’s sixth change in manager in less than four years.

The question is: how much is owner Abramovich willing to sacrifice stability in the name of his Champions League obsession? 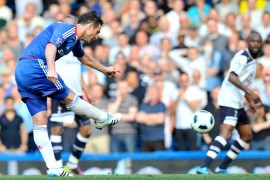 Chelsea ‘get what they deserve’

Frank Lampard says Chelsea have ‘grafted’ themselves back into title race as they beat Spurs with controversial goals. 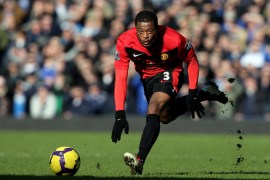 The title race is not over 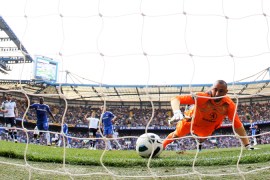 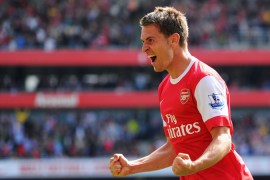 The title race is now on