Porto will aim to cap a superb season by lifting the Europa League trophy when they meet compatriots Braga in the first all-Portuguese final of a UEFA competition.

In coach Andre Villas Boas’ first season at the club, Porto cruised to the Portuguese title undefeated and reached the Europa League final in style, overwhelming opponents such as Spain’s Sevilla and Villarreal with their attacking strength.

“Given what they’ve done this year, it’s natural to say Porto are very much the favourites,” said Braga coach Domingos ahead of Wednesday’s final in Dublin.

His team have, however, become adept at beating the odds this season to reach their first European final by combining gritty performances and clinical finishing.

They beat Celtic and Sevilla to reach their first European Champions League group stage, where they recovered from a thrashing by Arsenal to post three respectable wins.

They also knocked out former European champions Liverpool and Benfica after dropping into the Europa League.

“With the right inspiration and motivation, we can take one of our chances, and that leads us to believe we can win,” Domingos added.

Their campaign has been largely built on strong defending but in Porto’s prolific Colombian striker Radamel Falcao they will face a threat that may be too much too handle.

Falcao scored five goals in the semi-final against Villarreal, taking his tally to 16 and beating a record of goals in European competition previously held by Juergen Klinnsman.

For Braga to spring another surprise they will also have to control Porto’s powerful Brazilian forward Hulk, cope with the thunderous long-distance menace of Colombian Fredy Guarin and outsmart a midfield that runs like clockwork.

“It was this organisation and the competence of us all together and the talent from these players that took us to an incredible run in the Portuguese championship,” Boas said.

“We made history and I think it won’t happen again. All that gave us this final and we are very ambitious about it.”

Porto are no strangers to this stage of the competition, winning the UEFA Cup most recently in 2004 under the guidance of then-coach Jose Mourinho.

Now Mourinho’s one-time protegee Boas will be hoping that, at just 33, he can become the youngest coach to win a major UEFA club competition. 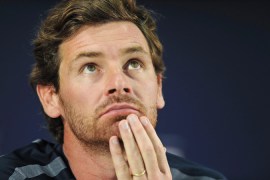 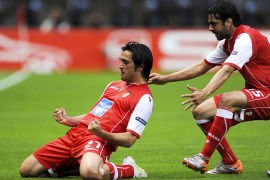 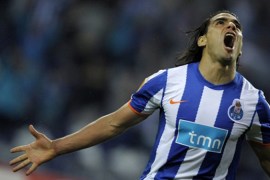