“We have taken the decision to take part in the Copa America,” said Li, whose squad will take one of two berths for guest teams in the July 1-14 tournament.

“We can go with an Olympic team, an under-23 (side) with five reinforcements basically over 23 years of age.”

Japan pulled out on Monday after failing to get the release of European-based players and facing a problem with J-League clubs, whose season has been extended into July following the earthquake and tsunami that devastated the country in March.

Costa Rica, guests at their fourth Copa America, will go into Group A with hosts Argentina, Bolivia and Colombia.

They held visiting Argentina to a 0-0 draw in a friendly in March.

“We want to raise the name of Costa Rica at international level and the more so in a tournament like this one,” added Li.

Meanwhile Mexico international goalkeeper Jesus Corona has been dropped by his country’s squad for the Concacaf Gold Cup in the United States next month.

His club, Cruz Azul, had two players suspended for six matches and coach Enrique Meza banned for three after a free-for-all that marred their Clausura championship semi-final defeat at Morelia on Sunday.

Morelia’s fitness coach Sergio Martin was banned for six matches and coach Tomas Boy for five for their part in the fracas sparked by Cruz Azul players when a home fan ran on to the pitch near the end with the score 3-0 to Morelia.

“Those sanctioned (for Cruz Azul) were six, (including Argentine midfielder) Christian Gimenez and (goalkeeper) Jesus Corona for six matches for…aggression against an opponent… on the pitch,” the Mexican Football Federation (Femexfut) said.

Meza and Cruz Azul striker Isaac Romo, who was sent off with Gimenez after the fracas, were suspended for three matches.

Two other members of the Cruz Azul coaching staff were handed two and three-match bans.

Morelia forward Miguel Sabah, who was also red-carded, was banned for three matches.

Corona and Martin were arguing off the pitch near the end of the fighting when the goalkeeper head-butted the Argentine, an incident the referee missed but which was filmed by TV Azteca. 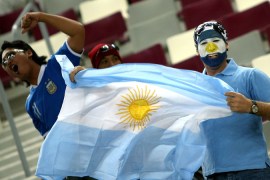 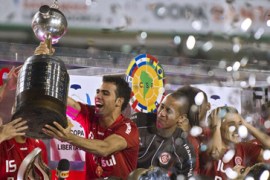