Following their shock 2-1 defeat to Birmingham City in the League Cup final on February 27th nothing has gone right for Arsenal.

Two weeks after their loss, the Gunners had been knocked out of the Champions League by Barcelona and out of the FA Cup by Manchester United.

Only two wins in 10 league games since the end of February has seen them tumble out of the title race and Sunday’s 2-1 home defeat to Aston Villa emphasised all their failings in one.

Although Arsenal continue to play their trademark attractive passing football, they looked a shadow of their former self against Villa. The Gunners played nervously in front of goal and lacked the passion and confidence to seriously threaten Gerard Houllier’s team.

After dropping out of the race for four trophies in such quick succession, it is hardly surprising Arsenal are suffering a crisis of confidence.

The media which used to lavish praise on Arsenal for their flair and skill, now frequently use the word inconsistent to describe Arsene’s ailing side.

To make matters worse, Wenger has become a man struggling to explain his team’s deficiencies.

He has been perplexed with how a team that played superbly to beat Barcelona 2-1 in the first leg of their Champions League defeat could squander a 4-0 lead at Newcastle United to draw 4-4, or be 3-1 up at arch-rivals Tottenham Hotspur and be pegged back to 3-3.

Manchester City’s league victory over Stoke has added to Wenger’s woes, with Arsenal likely to finish in fourth where they will have to negotiate a tricky Champions League play-off in August to qualify for the lucrative group stage.

Wenger has looked a tortured soul for much of the second half of the season, throwing water bottles around, arguing with whoever has been nearby and looking utterly distraught as his team floundered and the glint of silverware faded away.

“We have gone through difficult times, especially since losing the League Cup final,” Wenger admitted.

“At times we have lacked maturity under pressure. We have had a lot of big disappointments and I think it has had a subconscious effect on the team. Yet we can play so well, and that makes it all the more frustrating.”

Arsenal supporters have done the previously unthinkable this season too – they have complained to radio phone-ins about Wenger, booed him and his team and criticised the board after a 6.5 percent price hike for already expensive season tickets.

But with Wenger’s reputation as one of world’s best managers still firmly in tact, the question of whether he stays or goes is more than likely going to remain in his own hands.

The Arsenal players certainly show no sign of disowning their loyal manager.

Arsenal defender Bacary Sagna insisted on Wednesday that the manager enjoyed the full support of the club’s players.

“Everyone is 200 percent behind him. I think he is the right guy,” Sagna told Sky Sports News.

“He made a lot for the team, for the players and for the club as well. So we just want to keep working hard and give the maximum.”

With the incessant pressure Wenger has been under this season, it would be understandable if the Frenchman decided it was time to pursue a different challenge.

The club’s future remains promising but unfulfilled on the pitch and the arrival of U.S. billionaire Stan Kroenke as the club’s new principal shareholder in the boardroom has added a level of uncertainty for many, including Wenger, off it.

Wenger has hinted at frustrations since a change in the boardroom: “I am a football man, not an office man, and you can take that any way you like,” he said two weeks ago.

If Wenger spends wisely in the close season and attracts the players he wants – relegated West Ham United’s England midfielder Scott Parker would be an option – the disappointments of this campaign may be quickly forgotten.

However, next season the pressure on the Frenchman, who was famously dubbed ‘The Professor’, will be even greater.

Six years without a trophy has been bad enough for the fans to endure, but it might just have become unbearable for Wenger too. 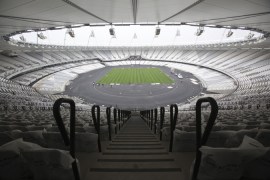 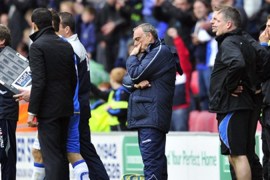 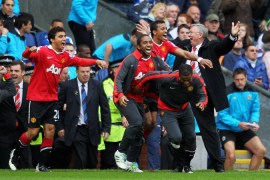