Manchester City followed United’s lead and claimed their own piece of silverware after Yaya Toure fired City to a 1-0 victory over Stoke in the FA Cup on Saturday.

On the day Manchester United won a record 19th league title, City fans can finally hold their heads high at the end of a week in which they also secured a place in the Champions League qualifiers for the first time.

City’s fifth FA Cup and first since 1969 was the first tangible reward for Abu Dhabi’s Sheikh Mansour bin Zayed bin Al Nahyan, who bought the club in 2008 and has spent around $487.6 million on new players.

“I can only say that I’m very happy for all the supporters,” a delighted City manager Roberto Mancini told ITV afterwards.

“After many years, they deserved to win this trophy.”

“We need to improve but we are very happy. We did a small piece of history of Manchester City. We start now.”

Manchester city midfielder, and former Gunner, Patrick Viera also recognised the relief and joy the fans will feel after the victory.

“It means a lot to the players but even more to the fans,” Vieira told ITV.

“They have been waiting a long time for this. There has been a lot of pressure on this team. It’s a really fantastic season for us.”

The meeting of arguably the richest club in world soccer and a team with just one League Cup in well over a century of mediocrity summed up the romance of the Cup and helped produce a wonderful atmosphere.

Manchester City were the rightful winners on the day dominating large periods of play, with Stoke offering little attacking football.

Thomas Sorensen was kept busy throughout, making two diving saves to keep out shots from Carlos Tevez and Mario Balotelli. Despite his reputation as a hellraiser off the pitch, Balotelli raised hell on it during the encounter and was awarded man of the match.

Before City took the lead, Toure sent a 30-metre screamer whistling inches past a post and David Silva bounced a volley over the bar as City took total control.

Stoke were unrecognisable from the team who thrashed Bolton Wanderers 5-0 on the same ground to reach the final for the first time and when they finally got sight of goal after 62 minutes City keeper Joe Hart blocked Kenwyne Jones’s mis-hit close-range shot after a long ball caught out the City defence.

It proved a costly miss as City quickly regained control and eventually found a way through. After a neat backheel by Balotelli and a half-cleared Silva shot the ball fell to Toure 12 metres out.

The mighty Ivorian, who also scored the goal which knocked out Manchester United in the semi-finals, put all his considerable power into a sweetly-struck half-volley and the result was surely one of the hardest shots to grace any of the 130 finals in the world’s oldest cup competition.

Stoke were unable to find a response and will have to settle for a place in the Europa League, a new adventure in itself.

“It’s so disappointing. As a team we never really created any flowing play, we didn’t hold the ball up well,” Sorensen said.

“The better team won and we didn’t play well.”

City’s long-suffering fans will now have their eyes on bigger things and will hope Saturday’s success and their top-four finish are merely the launchpad for a new golden era to surpass their brief spell in the limelight more than 40 years ago.

“This is the start. This is the most important one,” City defender Micah Richards told ITV as the club’s adopted anthem “Blue Moon” rolled down from the Wembley stands.

“We’ll spend in the summer and we’ll get bigger each year.”

With both United and City fans having something to cheer, the city of Manchester is set to host one big party tonight. 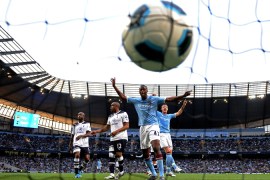 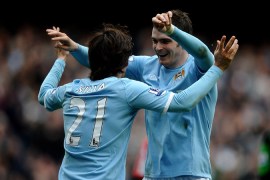 The magnificent wingers of Manchester 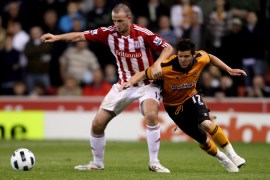 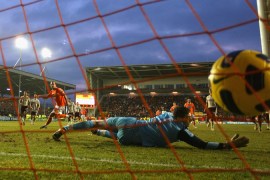