Only weeks after receiving parcel bombs in the post, Celtic manager Neil Lennon was attacked by a fan during his team’s 3-0 Scottish Premier League win over Hearts in Edinburgh on Wednesday night.

After Celtic scored the second goal, a fan ran onto the field from the home section of the main stand and struck Lennon at Hearts’ Tynecastle stadium.

The assailant was eventually restrained by stewards and taken away by police in a match that Celtic, second behind leaders and arch Glasgow rivals Rangers, needed to win to keep the title race alive with one more game of the season remaining.

The attack appears to be the latest sectarian incident involving Celtic, who are traditionally supported by Irish Catholics.

Glasgow rivals Rangers and Hearts, based in Edinburgh, are both mainly supported by Protestants.

Former Northern Ireland and Celtic captain Lennon has received death threats on several occasions and retired from international football because of them.

A package containing bullets was intercepted last month at a sorting office in Northern Ireland, one of a series of suspicious packages that have been addressed to him.

Celtic assistant boss Johan Mjallby said no one could blame Neil Lennon if he walked away from Celtic following Wednesday’s events.

“We all know that he is a strong character but how much can a guy take? It’s a dark day for Scottish football.

“He’s his own man and he obviously loves what he’s doing right now but you can never blame him if he is considering going.

“He’s coped with so much this season and he’s still been able to work with the team and improve them.

“It’s too early to say how he’s going to react. I haven’t really had time to speak to him much.

“We will have to wait and see how Neil reacts to this but the rest of us in the dressing room are desperate for him to continue doing his work.”

Lennon and two prominent Celtic fans were sent parcel bombs in the weeks after a tumultuous match between Celtic and Rangers. The packages were intercepted before reaching their targets and did not explode.

Strathclyde Police said on Thursday that two men have been arrested following their investigation of letter bombs addressed to Lennon and two prominent fans of the club in March and April.

Lennon quit international football in 2002 after having made 39 appearances, saying he had received death threats from a paramilitary group in Northern Ireland.

Celtic’s victory kept the Scottish Premier League title race alive going into Sunday’s final round of fixtures when they host Motherwell. Their arch-rivals Rangers, who visit Kilmarnock, are one point ahead but with an inferior goal difference. 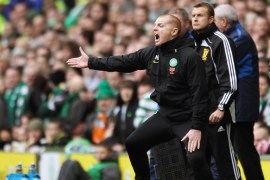