Giampaolo Pazzini scored two injury-time goals to earn Inter Milan a 2-1 victory at Cesena and revive their faint hopes of retaining the Serie A title.

With the 90 minutes up, and the hosts leading 1-0 through Igor Budan’s 56th-minute goal, Inter faced the prospect of handing their bitter city rivals AC Milan the chance to win the title on Sunday at their shared San Siro home.

Anything other than a win over Cesena would have meant a victory for Milan at home to Bologna would be enough to see the rossoneri crowned league champions for the 18th time.

Substitute Pazzini claimed he was motivated by the desire to avoid handing Milan a gift on Saturday.

“We didn’t want the others to win because we let them have it and then I also did it for my old friends at Sampdoria,” he told SkySport, referring to his ex-club Sampdoria’s involvement in the relegation battle alongside Cesena.

“We want to win for ourselves and then we’ll see where we finish. The goals were my reply because people said I hadn’t scored for 40 days. It amused me to read that but I enjoyed scoring even more.”

Inter coach Leonardo joked that their late show was just part of the plan.

“It was all calculated, it was organised from the first minute, everything went perfectly,” he said.

“We looked at it as a decisive game and it was very important to get the three points for the Champions League, even if qualification isn’t yet secured.

“Winning in this way really is incredible even if it’s not our first comeback.

“We’re five points behind Milan so anything can happen,” he added having laughed at a question regarding Inter’s title hopes.

“Our aim for today was the Champions League, now we’ll see what happens.”

It was more than Inter deserved after possibly their most listless performance this season in which they created almost nothing until the 90 minutes were up.

For Cesena it was deeply disappointing after they looked set to go five points clear of the relegation zone.

The first half was a poor affair with only one chance of any note, going the way of the hosts early on.

Emanuele Giaccherini burst onto a dinked ball over the top and headed on but the diminutive striker faced a race to the ball with Luca Castellazzi.

Although he got there first he couldn’t quite stretch his leg out far enough to prod the ball over the Inter goalkeeper who blocked.

Cesena got the lead their industry deserved on 56 minutes but it was in no small part thanks to some poor defending from Inter.

The overlapping Luca Ceccarelli was allowed to run free down the right behind Japan full-back Yuto Nagatomo and he sent over an inviting cross into the centre of the box.

Lucio was drawn to the near post where his centre-back partner Andrea Ranocchi already was and both missed the ball allowing Budan to volley home unmarked from eight yards out.

A mark of Inter’s ineptitude was highlighted by the fact they reached the 90 minute mark with only two half-hearted efforts from Lucio to show for their efforts.

In the dying moments Cesena substitute Dominique Malonga wriggled into the box and then saw his shot deflected behind for a corner as he tried to put the icing on the cake.

But what happened next was as unexpected as it was stunning.

Suddenly in injury time Samuel Eto’o sent an inswinging cross into the box and Pazzini got in front of his marker to poke home on the volley.

And moments later he rose again in the box to head home Maicon’s cross from the right for the most dramatic turnaround. 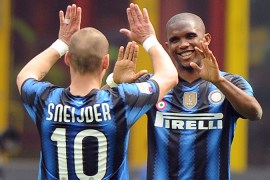 Inter creep back to second

Goals from Sneijder and Eto’o help Inter Milan come from behind to beat Lazio in Italy’s Serie A. 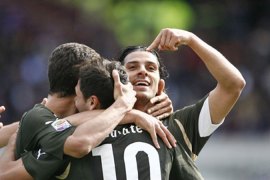 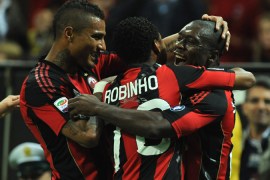