Arsenal squandered a 3-1 lead at White Hart Lane as their English Premier League title hopes suffered yet another blow in a thrilling London derby on Wednesday night.

Arsene Wenger’s side needed a win to keep in touch with league leaders Manchester United, but instead the fast-paced game left their challenge hanging by a slender thread.

Samir Nasri and Robin van Persie had Arsenal cruising until three minutes before the break, but Tom Huddlestone struck to start the Spurs fightback.

London rivals Chelsea stole the advantage as their 3-1 win over Birmingham at Stamford Bridge allowed the defending champions to overtake Arsenal to take second place.

United are six points ahead of their rivals with five games remaining, but must still play both sides.

Arsenal started quickly and strongly and struck after five minutes when Cesc Fabregas played Theo Walcott through and he slid the ball past Heurelho Gomes for his 12th goal of the season.

Arsenal led for only 90 seconds before Spurs scored another finely crafted goal when Vedran Corluka crossed for Dutchman Rafael Van der Vaart to lash the ball past Arsenal keeper Wojciech Szczesny from the edge of the box.

Arsenal began to assert themselves in midfield and continued to look dangerous on the break, Samir Nasri firing through Michael Dawson’s legs on 12 minutes to put his side ahead.

Walcott chipped the ball in and Robin van Persie’s powerful header was palmed away brilliantly by Gomes, only for the Dutch striker to lash the rebound into the roof of the net.

Spurs hit back with a brilliant goal of their own when Tom Huddlestone half-volleyed a rocket of a shot from outside the penalty area before halftime.

It could have been worse for Arsenal as Roman Pavlyuchenko, Peter Crouch and van der Vaart missed late chances to steal the win for Spurs.

Florent Malouda inspired Chelsea in their title hunt scoring twice in a 3-1 win over Birmingham.

The France winger broke the deadlock at Stamford Bridge after just three minutes with a far-post finish and rounded off Chelsea’s scoring in the 62nd with a firm header from eight yards, taking his season’s tally in the league to 12 goals.

That brace sandwiched a superb individual effort by Salomon Kalou in the 26th.

Chelsea must still travel to Old Trafford to play United on May 8, while Alex Ferguson’s team also have to visit Arsenal on May 1. Arsenal miss the opportunity to close in on Manchester Utd after a dramatic finish to their game with Liverpool. Chelsea close in on Arsenal

Chelsea put European disappointment behind them with win over West Brom as Blackpool drop into relegation zone in EPL. 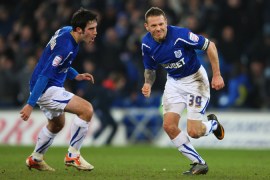