“It was one of the best races I have experienced,” Hamilton said.

“It feels amazing to be able to bring it home. I am absolutely overwhelmed. It feels like a long, long time (since winning). I am so proud and extremely grateful.”

The 26-year-old, triumphant in Shanghai on his way to the title in 2008, was the first driver to win twice in China since the race made its debut on the calendar in 2004.

Hamilton came close to being out of contention before the race even started, when a fuel leak was discovered in his engine.

McLaren mechanics worked frantically in the garage with the seconds ticking down until the pit lane closed.

Had they missed the deadline, Hamilton would have started from pit lane rather than third on the grid.

They sent him out on the installation lap with just under a minute to spare, but with much of the engine cover missing, and that had to be drilled onto the car while it was sitting on the grid.

Vettel started on pole but lost the lead at the first corner to Hamilton’s team mate and compatriot Jenson Button, who finished an ultimately disappointing fourth.

Vettel admitted that Red Bull’s long-stop strategy had failed but he paid tribute to Hamilton’s victory.

“We probably tried too hard staying on two stops,” said Vettel, winner of the season’s opening races in Australia and Malaysia.

“The middle stint should have been longer, but then you find yourself on the hard tyre and I saw Lewis coming closer and closer.

“We made a couple of mistakes and we had some problems, but still we finished second so I am very happy for that. Congratulations to Lewis and McLaren.”

Mark Webber, who started 18th on the grid but finished third behind his Red Bull teammate after a near-wondrous final push, poked fun at his colleague.

“Congratulations to Lewis. It was good that someone finally (beat Vettel),” Webber joked.

German Nico Rosberg, one of several drivers who looked a possible winner after leading during the race, brought his Mercedes home in fifth place ahead of Brazilian Felipe Massa of Ferrari and his team mate, two-times champion Spaniard Fernando Alonso who was seventh.

Despite engine troubles Hamilton remained calm and made a good start from third place on the grid, moving up into second after Vettel struggled to pull away.

As the field jostled for places in the opening laps, Button settled down in front ahead of Hamilton and Vettel.

On lap 14, when it seemed that the McLaren team was delaying too long on a pit-stop, Vettel passed Hamilton on the Shanghai circuit’s long straight, before diving into the pits behind Button.

But Button, the 2009 champion, then made a rookie’s error when he pulled his McLaren up in the Red Bull pits, and had to be waved away by their mechanics having lost precious seconds before he moved forward to his own team’s slot.

This was perfect for Vettel who pulled out ahead of a red-faced Button.

This left Hamilton leading, but he was unable to resist the Ferraris of Massa and Alonso before pitting, along with Massa at the end of lap 15.

This left Alonso in the lead until he pitted and Rosberg took over at the front, having made an early stop. Massa rejoined in seventh.

Rosberg enjoyed a lead of more than four seconds ahead of Vettel until he pitted again after 25 laps alongside Hamilton and Webber, Button having pitted one lap earlier.

All of this chaotic action left Vettel out in front leading Massa by three seconds at the half-way mark of the 56-laps race.

Vettel made his second stop after 31 laps to give Massa the lead ahead of Rosberg and then the Brazilian himself pitted after 33 laps and emerged on a set of hard tyres.

But Hamilton clawed his way back and having sped his way through the field he passed Vettel at turn six on lap 52, going on to win.

Seven times world champion Michael Schumacher crossed the line in eighth place at the circuit where he had his last podium finish with Ferrari in 2006.

With three races completed, Vettel leads the drivers’ standings on 68points, ahead of Hamilton on 47, with Button on 38 and Webber on 37. 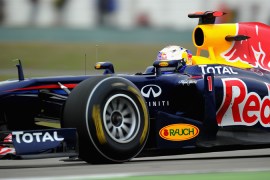 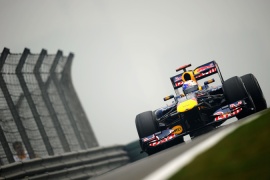 Vettel leads the way in Shanghai

Red Bull driver sets the pace in the practice sessions ahead of the Chinese Grand Prix. 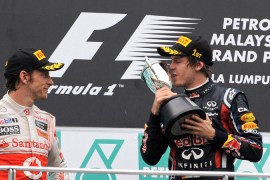 German in unstoppable form with another pole to flag finish ahaead of Button and Heidfeld at Malaysian Grand Prix. 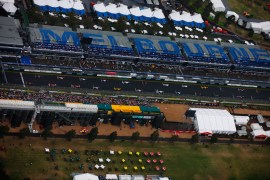