The most anticipated fight in heavyweight boxing looks like it will finally go ahead.

The two sides had twice failed to finalise a deal after disagreeing on how to split revenues.

“They didn’t want to come to the UK for a couple of reasons. David is happy to go anywhere to fight Vladimir… he doesn’t care if it’s in his back garden. David is raring to go.

“The most likely date is July 2 in Germany, but it may be a week earlier on June 25. We were always confident that this fight would happen.”

With no possibility of a single fighter holding all belts – Vitaly Klitschko holds the WBC belt and the brothers are not going to fight each other – the Haye fight was long considered the one bout that could establish the Klitschkos as the undisputed champions after dominating their sport in the past years.

Haye had pulled out of a scheduled fight with W ladimir in 2009, citing an injury, although it was more a case of the two sides and their promoters failing to reach a deal.

Vladimir Klitschko on Saturday called off his April 30 fight against Britain’s Commonwealth champion Dereck Chisora after failing to recover in time from an injury sustained in December.

The fight againstChisora was originally scheduled for December but was postponed when Klitschko tore an abdominal muscle. 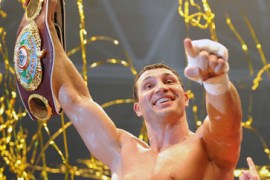