England continued to be the most unpredictable team of the tournament as they claimed South Africa’s last seven wickets for just 41 runs in a thrilling Cricket World Cup match in Chennai.

Following their astonishing tie with India and humiliating defeat to Ireland, England produced an amazing comeback to edge the Proteas by six runs – defending a meagre 171-run total.

The World Twenty20 champions came up with a spirited bowling display to skittle out their opponents for 165 runs in 47.4 overs to snatch an unlikely win in Group B.

Stuart Broad took the last two wickets to finish with 4-15 and, barring Hashim Amla’s 42, none of the South African batsmen could make an impact.

It came after South Africa’s left-arm spinner Robin Peterson (3-22) had wrecked England top order, claiming two wickets in his first over, while his in-form spin colleague Imran Tahir (4-38) scythed through the lower order to send England packing for 171 in 45.4 overs.

Half-centuries from Jonathan Trott and Test outcast Ravi Bopara were the only highlights.

“We didn’t think 170 was as competitive as it should be but it’s proved to be just that so we’re delighted,” said England spinner Graeme Swann at the M A Chidambaram Stadium on Sunday.

“We knew there was a lot in the pitch for us. We knew it would turn, we knew it would keep low for the seamers and we knew how difficult it was to score from when we batted, especially at the end.

“As it turned out, their innings mirrored ours. We knew that pressure would build on the later batsmen and it was very hard to score runs at the end.

“It just goes to show that if you believe you can win any game… as we proved today.”

The result proved a massive boost for England as their chances of winning their first 50-over World Cup was in serious jeopardy after a scrappy win against the Netherlands, a dramatic tie with India and the morale-shattering loss to the Irish.

“I thought the guys in the field were outstanding and it puts us back on track in this World Cup and it couldn’t come a day too soon,” said a hugely relieved England skipper Andrew Strauss.

“A cliffhanger of a game, we’re keeping people interested at the moment. We’re delighted to win and we move on with high hopes of achieving good things in this tournament.”

The South African batting line-up, which shone in victories against West Indies and the Netherlands, showed similar vulnerability to slump from a relatively comfortable 82-2 to 127-7.

Things further spiced up when Faf du Plessis (17) ran himself out and Michael Yardy removed Peterson to pave the way for eventually a memorable victory, made possible by Broad’s late double strikes.

In the morning, Strauss won the toss and decided to bat first but a nightmare unfolded before his eyes.

Peterson dismissed the scoreless Strauss with his third delivery and South Africa-born Kevin Pietersen with his sixth and was not done yet.

Having sent down a maiden over, he returned to catch Ian Bell off his own bowling to reduce England to 15-3 inside five overs.

The 99-run fourth wicket stand between Trott (52) and Bopara (60) somewhat arrested the slide but England never got going and lost the last five wickets for just 23 runs.

But despite their batting limitations, England’s bowlers more than made up for it with their inspired display and made sure what on paper had looked like a low total could not be surpassed.

“We almost had a bit of a rollercoaster World Cup so far. We were disappointed against Holland, excellent in passing against India and excellent for the most part against Ireland but completely outplayed in the last 10 overs,” said Swann.

“Today we’ve been 50-50 again. Below par with the bat but we’ve bowled and fielded probably as best as we have all tournament.” 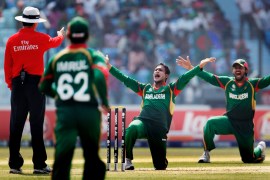 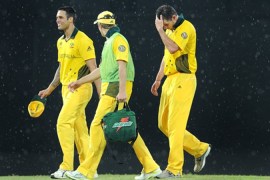 Teams take a point each from Cricket World Cup Group A clash after rain prevents a result in Colombo. 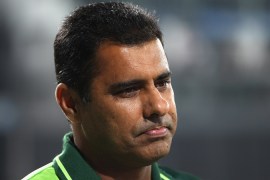 Waqar: ‘We must improve’ 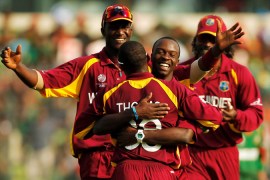