It is all about pride on Saturday in Italy’s Serie A, as a surging Inter Milan, firmly back into contention for their sixth consecutive scudetto, aim to end AC Milan’s season-long occupation of the top spot.

Milan have a two-point advantage on Inter and are the nominal hosts at the San Siro ground the two sides share, but are without suspended striker Zlatan Ibrahimovic and defender Lucio.

They also won there earlier in the season but Inter have closed a gap that once stood at 13 points in mid-December and have by far the better form since the turn of the year.

Boosted by their come-from-behind win over Bayern Munich in the Champions League, Inter are on a roll and are looking to take the lead from their rivals.

Inter’s good form is obvious with 12 victories from 15 league games since last season’s Milan coach Leonardo took over the reins from Rafa Benitez at the start of the year.

Leonardo, who spent more than a decade as a player, director and last season as coach for the Rossoneri, leads out the visiting Nerazzurri.

While Jose Mourinho’s Inter claimed the treble last season, the Brazilian, in his rookie year as coach, led Milan to third place before leaving through mutual agreement amid rumours of interference in team selection.

“The derby won’t be crucial because after that there are another seven rounds,” said the 41-year old, who has also guided Inter to the quarterfinals of the Champions League and semifinals of the Italian Cup.

“What we wanted to do was get closer, get back in the race and challenge for the scudetto. We reach this derby in the best possible condition.”

Inter midfielder Dejan Stankovic was confident ahead of Saturday’s game:

“Maybe we’re seen as favourites because of recent results, we’ve made a historic comeback and we don’t want to stop there,” said the Serbia captain.

“We won’t let up, that’s for sure, but I am a little worried about their professional pride.

“They will want to show they haven’t spent 20 weeks leading Serie A for nothing, to show that they have quality.”

All to play for

Milan’s interest in European competition is over for another season and the club’s hierarchy surely would not be satisfied with merely a Cup victory for their year’s efforts not to mention their economic outlay over the past 12 months.

Milan looked almost home and dry a couple of weeks ago after Inter had drawn away to lowly Brescia.

The rossoneri could have moved seven points ahead of their rivals with a victory but instead they drew at home to rock-bottom Bari and then lost away to Palermo the next week.

That has left them just two points above their bitter city rivals and under pressure also from Napoli, three points back, and outsiders Udinese, six points behind.

Robinho, likely to start in attack alongside compatriot Pato, has promised to dance the samba if he scores the winner.

“It’s a key moment for us and we cannot afford to fail if we want to win the scudetto,” the Brazilian said before addressing Leonardo’s controversial decision to join Inter.

“It was his decision to go there but I can understand the Milan fans’ disappointment. He will have to accept the consequences of his actions.”

Without Ibrahimovic, Milan coach Massimiliano Allegri is likely to add muscle to his attack in the shape of Kevin-Prince Boateng rather than Antonio Cassano.

To top it all off, there’s also the always heated Sicilian derby between Catania and Palermo. 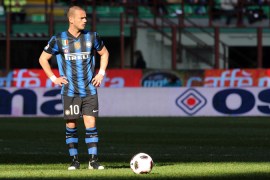 Single goal enough to beat lowly Lecce as defending champions ensure they will go top if they win Milan derby. 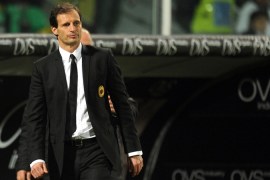 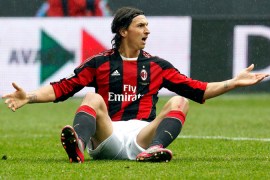