The Liverpool striker struck after 78 and 81 minutes to give the Dutch a 14th consecutive victory in qualifying matches after Hungary had hit back from an early setback to threaten an upset in a thrilling Group E encounter.

They lead the group with a maximum 18 points, although the sight of Robin van Persie going off with a knee injury was a worry for the Dutch and his club Arsenal.

Defending champions Spain, who won 3-1 at Lithuania look set to join them in another dominant performance inspired by midfielder Xavi Hernandez.

The Dutch are yet to drop points in six games in Group E and ended the night nine points clear of Sweden, who beat Moldova 2-1 and have two games in hand.

Hungary are third, level on points with Sweden, but having played two games more.

Elsewhere, Belgium closed to within five points of Group A leaders Germany by beating Azerbaijan 4-1 in Brussels.

Guus Hiddink’s Turkey defeated Austria 2-0 and are now a point behind the Belgians in third place with a game in hand.

In Group C, Serbia, Northern Ireland and Slovenia all failed to make up ground on leaders Italy.

Van Persie opened the scoring after 13 minutes when two Hungarian defenders failed to clear a corner kick and the striker netted at the near post.

However, he was forced off a minute before half-time when he was injured by a late tackle by Vilmos Vanczak.

Hungary took advantage of a sloppy start to the second half by the hosts to turn the match on its head.

Hungary’s Gergely Rudolf dribbled into the area and his shot deflected into the net off Rafael van der Vaart and four minutes later a fine cross from Balazs Dzsudzsak was volleyed home by Zoltan Gera.

Playmaker Wesley Sneijder equalised on the hour after a lucky one-two with Vanczak and 12 minutes later Ruud van Nistelrooy put the Dutch ahead with a deflected shot after a superb solo run by Ibrahim Afellay.

Gera equalised with 15 minutes remaining after more Dutch uncertainty at the back but Kuyt volleyed his side back ahead from an Afellay cross and sealed the points with a flukey lob over the stranded Hungary keeper Marton Fulop.

In Lithuania, Xavi scored in the 19th minute when his shot from outside the area deflected over goalkeeper Zydrunas Karcemarskas at Dariaus ir Gireno Stadium.

Despite having little of the play, Lithuania equalised through Marius Stankevicius’ long-range shot in the 57th.

Xavi set Juanma Mata free down the wing before Lithuania defender Tomas Razanauskas guided the substitute’s pass into his own goal in the 70th minute.

Mata scored the third goal with seven minutes to play.

Spain now have a six-point lead in Group I. In the evening’s other Group I match, the Czech Republic galvanised their grip on second place by winning 2-0 at home to bottom side Liechtenstein. 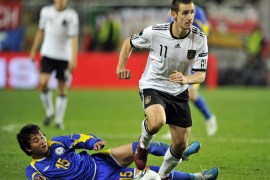 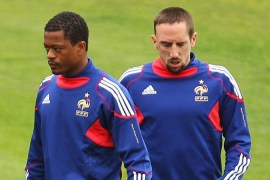 World Cup rebels back in the fold

Evra and Ribery return for France in Euro 2012 qualifiers while Terry takes back England captaincy from Ferdinand. 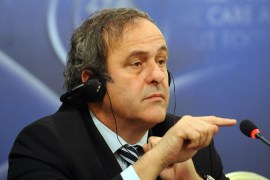 Platini says Serbia will be thrown out of the Euro 2012 qualifiers if their fans cause any more crowd trouble. 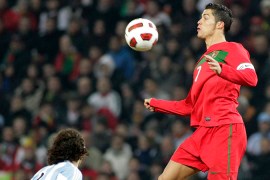