Real Madrid turn their attentions to the European Champions League after a weekend that saw them close the gap on Barcelona to five points in the Spanish Primera Division.

Champions Barca were held to a 1-1 draw in a thrilling clash at battling Sevilla on Sunday.

Pep Guardiola’s side had their usual swagger in the first half at the Sanchez Pizjuan and looked to be cruising when substitute Bojan Krkic, who replaced the injured Pedro, put them ahead in the 30th minute.

However, after Alvaro Negredo held off two defenders and crossed for Jesus Navas to nod in the equaliser four minutes after half time the match burst into life, with end-to-end action and both sides coming desperately close to snatching a winner.

Real coach Jose Mourinho’s seven years of success in the Champions League has coincided with Madrid’s poor run in the competition but both will hope the chemistry is right on Wednesday as the Spanish club aim to end a last-16 jinx.

Nine-times European champions Real have not made it past the first knockout round since 2004 – the year Mourinho won the trophy at Porto – but after a 1-1 draw at Lyon in the first leg in France, coach Mourinho’s side are well-placed to finish the job at the Bernabeu and reach the quarters.

Holders Inter Milan, the club Mourinho steered to glory last season when they beat Bayern Munich in the final, are in grave danger of an early exit after the Bundesliga side won 1-0 in the San Siro in the first leg.

Should Bayern protect their advantage on Tuesday to gain revenge for their defeat in Madrid last May it would mean Italy are without a team in the Champions League or Europa League.

“We are still good enough to do a job in Munich and hold on to our crown,” said Inter boss Leonardo, playing down the pressure.

“I don’t believe we are carrying any particular burden for being champions. If anything it just makes us more motivated.”

The week’s other last-16 tie looks the most cut and dried with Chelsea having established a 2-0 lead against FC Copenhagen in the Danish capital two weeks ago.

When Mourinho won the Champions League for Porto against Monaco in 2004, fans of Real would have laughed off suggestions their club could spend the next six years as also-rans in the competition.

Last year’s exit at the last-16 stage by Wednesday’s opponents spelt doom for Manuel Pellegrini and paved the way for Mourinho to occupy the hottest coaching seat in world soccer, tasked with plotting a route to a Wembley final in May.

The Portuguese once again demonstrated his knack for knockout
glory last season when he outsmarted Barca in the semis with Inter.

Real have impressed in the tournament so far and warmed up with a 2-0 La Liga victory over Hercules on Saturday.

They have won all 21 of their matches this season at the Bernabeu which Mourinho has turned into a fortress.

“The key for me will be playing with a 12th player,” said the Portuguese, referring to the club’s fans.

“It would be much easier. If the Bernabeu responds we will have won much in advance and we will also be stronger.

“Lyon are a very good team with experience and tradition in the Champions League. We will have to be in optimum form for the clash.”

Mourinho’s striking options have been enhanced by the form of ex-Lyon striker Karim Benzema who scored twice against Hercules.

Frenchman Benzema said: “I want to score against Lyon. I feel much better than before. I am convinced we will defeat Lyon”.

The omens do not look good for Inter who have failed to win their last four Champions League away games and conceded three goals in the last two – against Tottenham Hotspur and Werder Bremen.

Inter have a major injury worry over former Bayern defender Lucio who was hurt in Friday’s 1-1 draw with Brescia.

Bayern will be buoyant after a 6-0 hammering of Hamburg – a win that moved them up to fourth in the Bundesliga.

Friday’s draw for the quarter-finals will definitely include Barcelona, Tottenham, Schalke 04 and Shakhtar Donetsk after they completed aggregate victories last week. 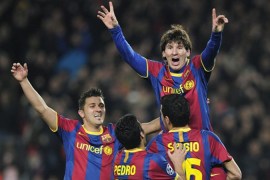 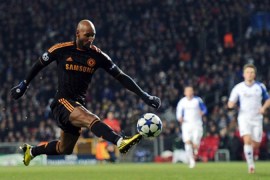 Comfortable win for the Blues in the European Champions League as Real Madrid are frustrated at Lyon. 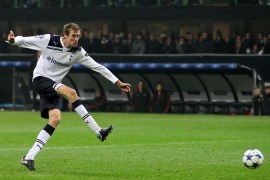