Real rested players ahead of next week’s visit by Olympique Lyon in the European Champions League, and Benzema’s third brace in as many games provided Real with a comfortable win.

Real maintained their perfect home record in 22 games in all competitions at the Santiago Bernabeu Stadium, the result moving them to within four points of leaders Barcelona who visit Sevilla on Sunday.

Earlier struggling Almeria snatched a point against Atletico Madrid with substitute Henok Goitom heading home to equalise in a 2-2 draw and in the late game Zaragoza beat third-place Valencia 4-0 to move four points clear of the relegation zone.

With topscorer Cristiano Ronaldo recovering from a leg injury, Benzema’s quality stood out in an otherwise uninspiring performance from his team.

The France striker grabbed the lead for the hosts in the 24th finishing off a nice team build-up, and sealed the win in the 56th with a great individual effort.

“I am (playing) well and I have been lucky to score two goals, but I have to give thanks to all the team,” Benzema said.

“The league isn’t over and we have to work to win the games we have left.”

Hercules started well, but failed to convert their good football into a goal, and have now gone 11 games without scoring away from Alicante.

Hercules had the first shot on goal in the 10th when former Real striker Javier Portillo weakly rolled the ball into the arms of goalkeeper Iker Casillas, and defender Noe Paramot sent a header over the crossbar in the 17th.

But Mesut Oezil sparked Real with a pass to right back Alvaro Arbeloa, who crossed low for Benzema to fire in unmarked.

Despite going behind, Hercules did not fold as goalkeeper Juan Calatayud saved a header from Emmanuel Adebayor in the 28th, and Casillas had to make saves to deny Olivier Thomert and Fransisco Femenia before half-time.

Adebayor came close to Real’s second right after the restart when his header rattled the crossbar before Benzema decided the match.

Benzema received the ball in the left corner, advanced along the end line before cutting back and shooting inside the far post with a beautiful right-footed strike.

Almeria will be happy with the point after twice coming from behind but they remain in the bottom three while Atletico will go home knowing that poor defending cost them a win in their battle for a European place.

Sergio Aguero put Atletico ahead after latching onto a ball over the defence but Albert Crusat drew Almeria level.

Aguero looked to have given Atletico the win when he struck a left shot into the corner from the edge of the area but Almeria again responded with Goitom powering a Jose Ortiz cross past the outstretched Atletico keeper. 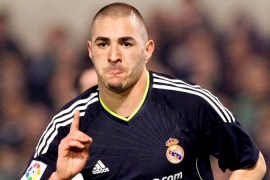 Real Madrid claw back to seven points behind Spanish leaders Barca as Karim Benzema scores two in 3-1 win at Santander. 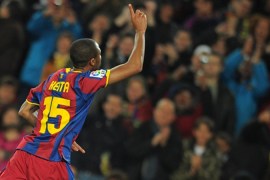 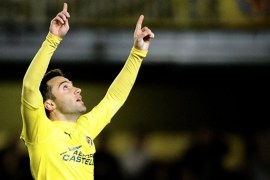 Villarreal get back on track 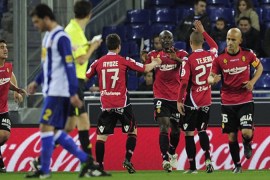 Real Mallorca record first away win at Espanyol in a decade with a 2-1 comeback win in Spain’s Primera Division.