A late penalty from Mirco Bergamasco secured a 22-21 victory as Italy stunned France in a historic rugby Six Nations victory at the Stadio Flaminio on Saturday.

Bergamasco contributed 17 points and fullback Andrea Masi scored Italy’s only try as the hosts beat the French for only the second time, the first coming in 1997.

France’s championship hopes are all but in tatters following a second successive defeat, but for Italy this determined performance will have banished memories of their 59-13 capitulation to England at Twickenham earlier this season.

In the late game, Wales topped Ireland 19-13 to stay in the Six Nations rugby race thanks to a controversial try by scrumhalf Mike Phillips.

For Italy coach Nick Mallett it was a victory he had been yearning for and perhaps will make the Italian rugby federation reflect about whether they should replace him after the World Cup by Frenchman Jacques Brunel.

“The team played really well against Ireland and had a good game against Wales when we had a bit of bad luck,” said the 54-year-old former Springbok coach.

“This win against a good French team is a huge huge achievement, I am so proud of the players and proud of what they’ve done for the Italian supporters.

“Sport is a funny thing, you lose a few in a row and then things change very quickly – the fans realise we were improving all the time.”

Italy began brightly in the spring sunlight and were 3-0 up within two minutes as Bergamasco kicked a straightforward penalty in front of the posts.

France, who had won by more than 30 points on their last three visits to Rome, were then quickly into their stride.

With 15 minutes on the clock, Clerc found space on the left, kicked over the head of Gonzalo Canale and dived over for an impressive opening try.

Parra, who started at scrumhalf instead of Dimitri Yachvili, missed the conversion but kicked an easy penalty six minutes later to give the Grand Slam champions an 8-3 lead.

After three defeats in the competition, including two at home, the signs were ominous for Italy, but Mallett’s much changed team were full of fight in front of another full house.

Making up for his early mistake, Canale steamed past several weak challenges and Italy won a penalty which Bergamasco converted.

France stepped up their game early in the second half. After another Parra penalty, the scrumhalf dived over between the posts on 51 minutes after a brilliant break from his halfback partner Francois Trinh-Duc.

But the Azzurri, whose starting 15 included eight players plying their trade in France, refused to lie down.

Bergamasco missed two kickable penalties before the impressive Masi, given his first start at fullback in place of Luke McLean, ran over in the corner.

Bergamasco converted on the hour mark and, roared on by the crowd, kicked another penalty four minutes later to bring Italy within two points at 18-16.

Penalties were shared before Bergamasco kicked between the uprights again with four minutes to go to give Italy a one-point win which they celebrated wildly at the final whistle.

“I haven’t bothered talking to the players yet, I just spoke to Titi (captain Thierry Dusautoir),” said the 42-year-old, for whom little has gone right since guiding France to their first Grand Slam since 2004 last year.

“We have to congratulate the Italians because from the first minute to the last minute they were better than us.

At Cardiff’s Millennium Stadium, Wales scrumhalf Mike Phillips scored a second-half try to give his team a 19-13 win over Ireland in their match.

Phillips raced over unopposed in the corner after a quick throw-in from captain Matthew Rees, sparking a furious protest from the Irish team who said the ball thrown in was not the one that had been kicked out.

Television replays indicated they were correct but, after consulting with his touch judge, referee Jonathan Kaplan awarded the try. 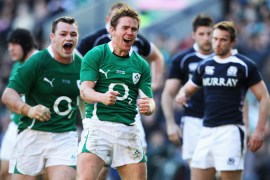 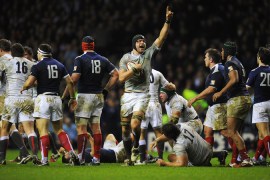 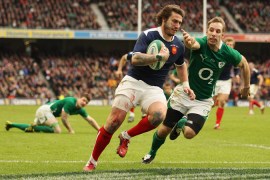 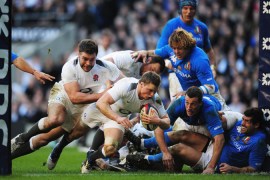 England beat Italy 59-13 as they bid for first Six Nations title since 2003 before Wales get win against Scotland.