The pressure increased on coach Gigi Delneri as ten-man Juventus let a two-goal lead slip in a controversial 2-2 draw at Cesena in Italy’s Serie A on Saturday.

Juve saw their hopes of qualifying for European competition next season dealt another blow when Cesena scored 10 minutes from time, despite a brace from Alessandro Matri giving the Turin giants a two-goal lead.

Cesena hit back through a Luis Jimenez penalty and Marco Parolo strike after Marco Motta was sent off leaving Juve remaining seventh in the league, while Cesena are still hovering just above the drop zone.

Having played badly in 2-0 defeats to Lecce and Bologna, Delneri was satisfied with his team’s efforts this time around.

“We played well, we created good chances and also took risks,” he said.

“We struggled after the break but that’s normal. We conceded goals from a penalty and a free-kick, we could have conceded sooner but we could also have scored more.

“Against Bologna and Lecce we didn’t pay enough attention but today we did well.”

After criticism of Alessandro Del Piero’s exclusion from the side for the 1-0 home defeat by Milan last week, the veteran was given a starting berth by Delneri against Cesena.

The former Italy striker showed his class when the visitors broke on the counter-attack after 19 minutes by teeing up Matri whose clinical finish gave Juve an early lead.

Sent clean through on goal, Emanuele Giaccherini, who scored twice last weekend in the win at Sampdoria, hit the post with his first shot and, with the goal gaping, somehow sidefooted the rebound high over from three yards in the miss of the season.

The Bianconeri took full advantage of the let off to double their lead. This time Matri set up Del Piero and, when his shot came back off the bar, the former Cagliari player was on hand to twist acrobatically and nod in his fifth Juve goal.

The game took another turn four minutes before half-time with the Juve defence breached again.

Marco Parolo rounded Buffon and was brought down for a penalty but, instead of being sent off, the Italy goalkeeper was only shown a yellow card to protests from players and fans.

After flares were cleared from the penalty area, Jimenez sent Buffon the wrong way from the spot to halve the deficit.

Two minutes later Juve were down to 10 men after Motta was handed a second yellow card for a high boot on Giaccherini.

After his let off, Buffon became the central figure in the second half saving from Parolo, Jimenez and Erjon Bogdani as Cesena piled on the pressure.

But there was nothing the Juve captain could do 10 minutes from time when Parolo finished sweetly into the corner from just over 15 yards after the visitors failed to clear a freekick.

Following Inter Milan’s 1-1 draw with Brescia on Friday, AC Milan can go seven points clear at the top with nine matches left if they beat bottom side Bari at the San Siro on Sunday. 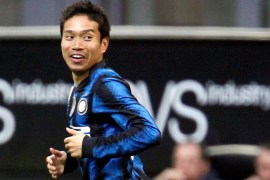 All five Inter goals scored in second half as Italian champions thrash Genoa 5-2 to go within five points of AC Milan. 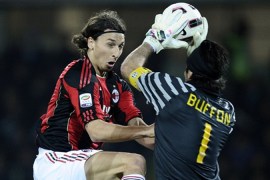 Gattuso strike sends Milan clear at the top of Italy’s Serie A with 1-0 win at Juventus. 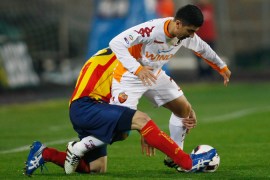 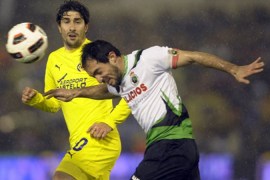