Real maintained their pursuit of leaders Barcelona, knowing a loss was not an option after the Catalan giants set a league-record 16th straight win on Saturday.

Jose Mourinho’s team responded in typical fashion with a commanding performance to stay perfect in 11 games at the Santiago Bernabeu stadium this season.

With Ronaldo, Kaka and Mesut Ozil providing attacking flair and pace and new loan signing Adebayor leading the line, Real thrilled their fans at the Bernabeu with a dominant and entertaining performance.

Brazil playmaker Kaka, who hit the crossbar in the second half, continued his return from a serious knee injury when he controlled the ball on the edge of the area and stroked it low past goalkeeper Claudio Bravo in the eighth minute.

Ronaldo had not scored in four matches and ended that barren run with a powerful left-foot strike from outside the area in the 21st.

He celebrated turning 26 on Saturday shortly before half time when he leaped above the Sociedad defence to send a header flying high past Bravo.

The visitors pulled a fortunate goal back in the 72nd when Iker Casillas blocked Raul Tamudo’s shot and the ball rebounded off Real defender Alvaro Arbeloa and into the net.

Togo striker Adebayor, who scored his first goal for Real since joining from Manchester City in Wednesday’s King’s Cup semi-final against Sevilla, clipped in Real’s fourth a minute from time.

“It always helps when you score an early goal,” Real’s Spain midfielder Xabi Alonso, a former Sociedad player, said in a television interview.

“We controlled the game tonight and it was a complete performance spoiled only by conceding the goal,” he added.

After an uneventful first half at Sanchez Pizjuan stadium, Sevilla improved following the restart but could not break through as Alexis Ruano and Frederic Kanoute missed clear-cut chances.

Malaga’s best scoring opportunity came near the final whistle, when Sevilla goalkeeper had to save Weligton’s header.

Sevilla moved into seventh place but remained six points away from the Europa League positions.

“These slip ups are moving us farther away from our goal (of playing in Europe next season),” said Sevilla coach Gregorio Manzano.

“We have to try harder to convert our scoring chances.”

Malaga, who have conceded the most goals in the league with 47, didn’t concede a goal for the first time in 11 weeks. 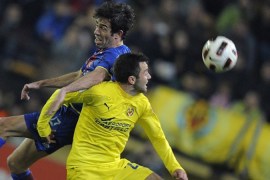 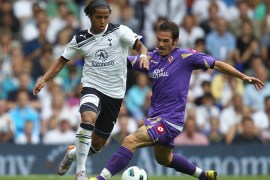 Although Primera Division spending triples on 2010 only $38 million is spent on actual transfers. 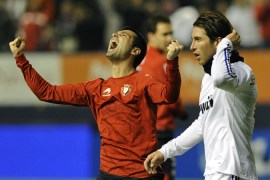 Defeat at Osasuna leaves Jose Mourinho’s men with a mountain to climb a day after leaders Barcelona notch record win.