AC Milan missed the opportunity to extend their lead at the top of Italy’s Serie A after being held to a 1-1 draw at Genoa on Sunday, slipping up for the second straight game in a row.

To add to their woes, second-placed Napoli increased the pressure on the leaders, with a 2-0 home victory over lowly Cesena.

Alexandre Pato opened the scoring for Milan, but Antonio Floro Flores equalised with his first Genoa goal since joining during the transfer window.

Champions Inter Milan surged up to third, five behind Milan with a game in hand, after Samuel Eto’o scored twice in an enthralling 5-3 home win over last season’s runners-up AS Roma.

“We know with Napoli breathing down our necks we cannot relax for the rest of the season.”

Pato, preferred to Antonio Cassano upfront, latched on to Zlatan Ibrahimovic’s pass to give the visitors a 29th-minute lead but Genoa forward Antonio Floro Flores struck home a loose ball just before the break.

Milan’s midfield was almost back to full strength after injuries and suspension but the hosts defended stoutly and deserved their point, with Rossoneri fans now fretting that a first scudetto since 2004 does not look as clear cut as before.

“We knew it wouldn’t be easy against Genoa,” said Allegri, adding that Cassano was still not fully fit after missing three months of action.

“We were unlucky with their equaliser and in the second half we didn’t play well, we gave away too many balls.”

Cavani hit his 18th goal of the season to give Napoli the lead in the 13th minute. Marek Hamsik slipped the ball to Christian Maggio, who cut it back for Cavani to poke in at the near post.

Four minutes into the second half, Napoli thought they had scored a second, but Maggio’s header was ruled out despite replays showing that the ball and Cesena goalkeeper Francesco Antonioli had been behind line when he pushed it away.

Sosa added a second late on when he slid in and hooked home Giuseppe Mascara’s low cross.

“We were just concentrating on what we were doing,” Cavani said.

“We didn’t hear about the Milan result until we got into the changing room. Of course it is good, but we still have a long way to go in the season.”

Third-placed Lazio missed the chance to pressure Milan themselves with a 1-1 home draw with Chievo.

Hernanes put the Romans in front with a ferocious free kick deep into first-half stoppage time but Cesar equalised.

Previously struggling on-loan Juventus forward Amauri superbly netted his first Parma goal in a 1-1 draw with Fiorentina, who had Adrian Mutu back for the first time since being banished for quitting training last month.

Third-bottom Brescia won the relegation battle with basement side Bari, Alessandro Diamanti netting a penalty and Andrea Caracciolo an injury-time strike in a 2-0 victory which puts eight points between the two sides.

Bologna beat Catania 1-0 to send the Sicilians closer to the drop zone with new coach Diego Simeone failing to stop a slide. 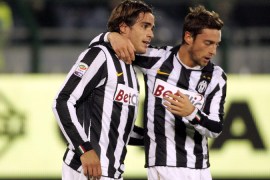 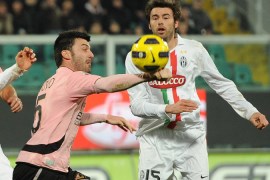 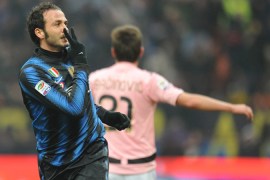 Giampaolo Pazzini weighs in with two goals and wins penalty as Italian champs roar back from 2-0 down to beat Palermo. 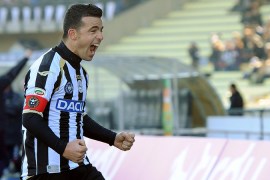