The season-opening Formula One race in Bahrain has been called off because of anti-government protests, officials say.

Salman bin Hamad Al-Khalifa, the crown prince of Bahrain who is the ruler’s son, said on Monday that the country must “focus on immediate issues of national interest and leave the hosting of Bahrain’s Formula One race to a later date”.

The race had been set to run in the Gulf Arab state on March 13.

The event could still be rescheduled but organisers said in a statement that no decision had been taken yet.

“The Bahrain International Circuit (BIC) today announced that the Kingdom of Bahrain would withdraw from hosting this year’s F1 Grand Prix race so that the country can focus on its process of national dialogue,” the organisers said.

“At the present time the country’s entire attention is focused on building a new national dialogue for Bahrain,” Salman said.

“Although [F1 supremo] Bernie Ecclestone had graciously made clear that a decision on the race was entirely Bahrain’s to make and was not yet required, we felt it was important for the country to focus on immediate issues of national interest and leave the hosting of Bahrain’s Formula One race to a later date.”

Ecclestone said in the statement that Formula One looked forward to returning soon.

“It is sad that Bahrain has had to withdraw from the race, we wish the whole nation well as they begin to heal their
country,” he said.

Protesters continue to occupy the Pearl Roundabout, a landmark junction in the heart of the capital, Manama.

Demonstrations began with calls to weaken the Sunni monarchy’s power and address claims of discrimination against the country’s Shia Muslim majority. They have now escalated their demands to calling for an end to the Al-Khalifa dynasty.

At least seven people have been killed since the protests began on February 14. 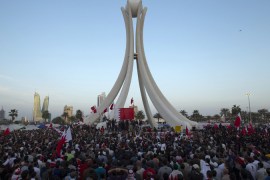 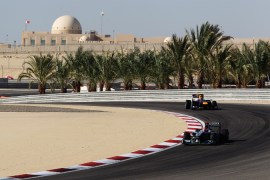 Season-opening Grand Prix in doubt at Sakhir after two feeder series races called off due to protester deaths in Manama.