Manchester United manager Alex Ferguson says he will resist calls for Manchester United to go on a spending spree in the January transfer window despite the pressure of needing to overhaul Manchester City at the top of the English Premier League.

The defending champions are two points behind City Going into Monday’s Boxing Day matches.
City have vastly outspent their neighbours in recent years and are now reaping the rewards as they sit at the top at Christmas for the first time since 1929.

Even though United have debts of about $718million, Ferguson maintains that cash will be made available by the Glazer family, which owns the club.

“Contrary to what some people seem to be fixated about, money for a transfer is not a problem if I deem it necessary,” Ferguson said.

The 69-year-old Scot delivered the message to fans in the matchday magazine for Monday’s game against Wigan just weeks after United’s surprise exit from the European Champions League in the group stage.

They had lost the final to Barcelona in May this year.

“I am perfectly happy with the strength of our squad in terms of depth, quality and age range,” Ferguson said.

“I will not be swayed by the endless tweets and blogs urging the club to get busy in the transfer market next month. As far as I am concerned I am marching perfectly in step, true to my beliefs and principles.

“While recruiting some of the world’s leading players can lift you into contention for honours, it doesn’t necessarily take you all the way.”

Midfielder Darren Fletcher is also sidelined with a serious bowel disease with no date set for his return.

Any further injuries could yet persuade Ferguson to search for additions next month.

“If a really top-class player became available, then we would go for him, or if we picked up any further serious injuries, it might be important to add to our squad.”

City need to shed players from their bloated squad and payroll in January to help the club comply with UEFA’s new financial restrictions, so a repeat of the summer spending that included the $62 million signing of Sergio Aguero is unlikely.

With 15 goals already this season, the Argentina striker has quickly established himself as City’s most potent force.

“He is not tall but his strength is amazing,” City manager Roberto Mancini said ahead of Monday’s trip to West Bromwich Albion.

“What is important at the moment is that he has improved our team.”

Only Robin van Persie has scored more than Aguero in the Premier League this season, with the Arsenal striker on 16 goals compared to 13 for the City forward.

The Dutchman’s goals have helped to haul Arsenal away from the relegation zone and back to within a point of the Champions League places.

The striker needs three goals in the remaining two games of 2011 to beat Alan Shearer’s Premier League record of 36.

“He’s an exceptional player, but what is very important for us is that over Christmas we win our games,” manager Arsene Wenger said.

With Arsenal just a point behind and Tottenham two points ahead, Chelsea will be looking to avoid a third consecutive draw on Monday when they host London neighbours Fulham, who were routed 5-0 by Manchester United on Wednesday.

“I’m not going to be thinking that because they lost to Man United it will be easy for us,” Chelsea striker Daniel Sturridge said.

“Derbies are always difficult and they will want to bounce back against us.”

Chelsea were held to a 1-1 draw on Thursday by Tottenham, who remain above their west London rivals in third – their highest placing at Christmas since 1984 – ahead of Tuesday’s match at Norwich.

Norwich are well clear of the relegation zone unlike the two other promoted sides, Swansea and QPR, who meet on Monday just four and two points clear from danger, respectively.

The bottom three is made up of teams from Lancashire. On Monday, bottom-place Blackburn are at Liverpool, 19th-place Bolton host Newcastle and Wigan are at Manchester United. 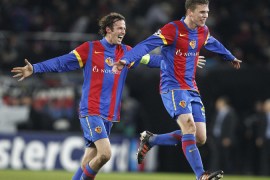 Manchester United out of Champions League 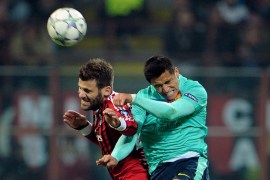