Joe Frazier, the former heavyweight champion who earned boxing immortality after his three memorable fights with Muhammad Ali, has died at age 67, according to US media reports.

Frazier died in Philadelphia on Monday, a month after being diagnosed with liver cancer.

Frazier took on Ali in three momentous fights in the 1970s – including the celebrated Thrilla in Manilla .

Smokin’ Joe was small by heavyweight standards, yet a ferocious fighter who smothered his opponents with punches, including a devastating left hook he used to end many of his fights early.

It was the left hook that dropped Ali in the 15th round at Madison Square Garden in 1971 to seal a win in the so-called Fight of the Century.

Though he beat Ali in that fight, Frazier lost the final two and, for many years, was bitter about the role Ali forced him to play as his foil.

More recently, he said he had forgiven Ali for repeatedly taunting him.

While the Fight of the Century is celebrated in boxing lore, Ali and Frazier put on an even better show in their third fight, held in a sweltering arena in Manila as part of Ali’s world tour of fights in 1975.

Nearly blinded by Ali’s punches, Frazier still wanted to go out for the 15th round of the fight but was held back by his trainer, Eddie Futch, in a bout Ali would later say was the closest thing to death that he could imagine.

Frazier won the heavyweight title in 1970 by stopping Jimmy Ellis in the fifth round of their fight at Madison Square Garden.

Frazier defended it successfully four times before George Foreman knocked him down six times in the first two rounds to take the title from him in 1973.

He was diagnosed last month with cancer, his personal and business manager said.

Leslie Wolff, who has been Frazier’s manager for seven years, said the boxer had been in and out of the hospital since early October and receiving hospice treatment the last week.

Until then, Frazier had been doing regular autograph appearances, including one in Las Vegas in September. 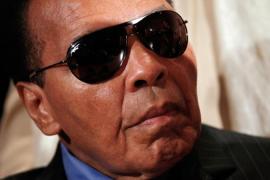 Muhammad Ali returns after 40 years to the scene of his first heavyweight title victory for the US release of a new book celebrating his life and accomplishments.