During a two-day conference at Chelsea’s Stamford Bride in London players, referees, chairmen and UEFA members shared their visions for the future of football.

After cutting through the perfectly media-pitched speeches on offer, a number of new initiatives and interesting revelations came out of the conference.

Here are the stories that made the headlines and some of the issues to look out for in the future.

UEFA announced that they are planning to reorganise qualifying fixtures for international football tournaments from 2014.

Gianni Infantino, UEFA’s general secretary, said he hoped qualifiers for the European Championship and World Cup would be played across six days from Thursdays and Tuesdays so that TV revenue would increase and fans could enjoy watching more weekend matches.

Currently, double-headers take place on Friday and Tuesday meaning a large number of matches take place at the same time.

A “Week of Football” spread over the weekend would be more profitable for broadcasters, sponsors and beneficial for fans who want to enjoy their weekend by watching an international match.

“It will be a great benefit to all. This has been unanimously supported by all 53 national associations,” said Infantino.

2) Goal-line technology is some way off

The English FA general secretary Alex Horne told the conference that it is unlikely goal-line technology will be ready until at least the 2013-14 season.

The English Premier League had been keen to see the new technology implemented next season to avoid controversial goal-line decisions but Horne said the International Football Board (IFAB) are not set to give the green light until after the European Championship.

“I think it’ll be 2013-14 because there’s then a big capital decision-making process for any league or any competition who want to apply it,” said Horne.

Referee Franck de Bleeckere is hoping that the technology has improved on the device he tested in 2005.

“I had a match with two goals and my watch showed five goals. Every time the ball went over the crossbar, it was a goal,” Bleeckere said at the conference.

Well-respected former referees Pierluigi Collina and David Elleray used the conference to stand up for the officials of the game who they believe face too much criticism.

Italian Collina, one of the games top officials before retiring in 2005, was quick to emphasise the value of referees.

“One of the things we have to consider is that we cannot buy referees at the supermarket.

“If you kill referees every week we can finish referees,” Collina said.

“We need years to build up referees and one second to destroy them. To keep them we need to protect them.”

“Last season in the Premier League 98 per cent of offside decisions were correct,” he told the conference.

Collina also said he was strongly against offensive chanting from the stands and that he would support drastic measure that targeted the problem, such as suspending the game until the culprits were identified or stopped.

4) Watch out for Arsenal in the future… and Chelsea

Despite their top players deserting them and a bad run of form, Arsenal chief executive Ivan Gazidis told the conference that his club certainly did not have to worry about money.

Although Gunner fans will be hoping they can still qualify for the Champions League, Gazidis said Arsenal could cope financially and compete even if they did not make the cut.

Arsenal are one of the few clubs in the English Premier League to make a profit which puts the club in a strong position when UEFA introduce their Financial Fair Play rules in 2012-13. The new legislation requires clubs to break even and not make persistent losses.

“We would rather qualify for it but (if we didn’t qualify) we have got a really stable model that could not just cope but do well and compete,” Gazidis said.

London rivals Chelsea are also ones to watch said chairman Bruce Buck. Also speaking at the Leaders in Football conference, Buck said new manager Andre Villas-Boas “can be the Fergie of Chelsea” and could lead his team to Champions League success in the next four years.

Carlos Tevez’s advisor Kia Joorabchian did not reveal what the Argentinean player is planning to do with his future but he left us in no doubt as to how important a good translator was, especially when dealing with foreign players in English football.

Joorabchian did not blame Tevez or Man City boss Roberto Mancini for the confusion after the unsettled Man City striker failed to come off the bench against Bayern Munich in the Champions League but pointed his finger at the translator.

“If you don’t have a very professional interpreter you have a problem. The interpretation was incorrect. Both questions and both answers from Carlos were interpreted incorrectly,” said Joorabchian.

While Sky News’ independent interpretation of the interview did back up Joorabchian’s claims, it also left no doubt as to what decision Tevez made on the night.

Sky’s translation states Tevez saying: “It’s just that I didn’t want to go in because I thought I was unwell. I wasn’t emotionally well, and I thought it better not to. I felt that it wasn’t suitable that I go on because my head wasn’t in the right place.”

However, Tevez must have welcomed the attention being diverted to the translator for a couple of days. 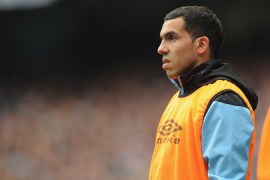 Man City boss says he will not play striker again after he refused to play during Champs League defeat against Bayern. 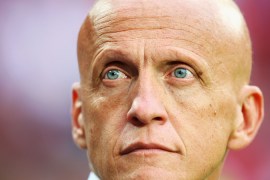 Collina: ‘I welcome a drastic measure’ 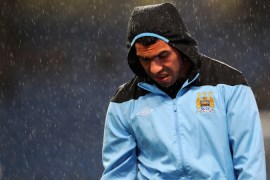 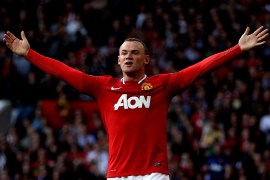