Known for being one of the slowest players on the PGA Tour, Kevin Na had to wait until almost the end of his eighth year on the U.S. circuit before celebrating his first victory.

The South Korea-born American finally broke through after holding off the challenge of world number 11 Nick Watney at the Las Vegas Open on Sunday, triumphing by two shots at the TPC Summerlin.

“It wasn’t easy,” Las Vegas resident Na told reporters after earning a two-year exemption on the PGA Tour and a cheque for $792,000 with his long-awaited victory.

“Nick was coming right behind me, and it looked like any time he was going to make a move. I tried as best as I could to stay one step ahead of him. The putt on 17 basically sealed the deal for me.”

Na rolled in a 43-footer at the par-three 17th to stretch his lead to two shots, a putt he prayed would break right shortly before the ball reached the cup.

“It was left off the start and the putt goes right at the end,” the 28-year-old said.

“It was perfect, right on line where I wanted it, just left of the hole about three inches.

“Then I just kneeled down on one knee and was just praying that thing would come back. And sure enough it did. When I made that putt, I felt like I had the tournament in the bag.”

Na, whose family moved from South Korea to the U.S. when he was eight, had endured 210 previous starts on the PGA Tour and several near-misses before breaking into the winners’ circle.

“I had a lot of thoughts going through my head throughout the whole round today,” he said after recording three birdies in the last four holes.

Asked if he appreciated his maiden PGA Tour victory even more because of his eight-year wait for success, Na replied: “I think so. The biggest heartbreak for me was losing a playoff in 2005 in Tucson. I was so young. I had just turned 21 and lost in a playoff.”

“I always think: ‘Would I be in a different position if I had won then?’ I don’t know. But you know what, eight years was worth the wait.”

Na, who became the top junior player in the U.S. before turning professional at 17, had been a runner-up three times on the PGA Tour before winning the 2011 Las Vegas Open.

A player known for his deliberate pre-shot routine, Na introduced TV viewers this week to his occasional ‘whiffed’ shot when he ends up aborting his swing.

During Saturday’s third round, he produced what looked like an ‘air’ shot on the 15th tee, though PGA Tour officials later ruled there was no intent to execute a strike.

“I’ve done it on TV a few times and I do it … probably once or twice a round,” Na explained. “My (swing) transition is what I’m always working on and my bad habit is I get quick.

“On the way down, if my transition doesn’t feel right, I try to stop, and obviously it’s impossible. The only way for me to stop is I have to come up and go over the ball.”

Na said he had spoken several times with PGA Tour officials to let them know that his aborted shot had become a habit. 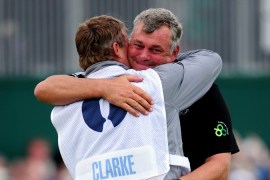 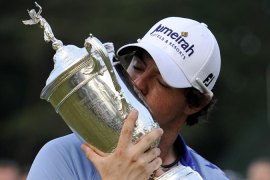 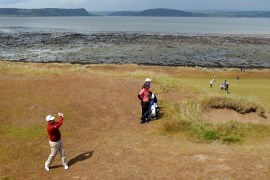 Lee Westwood tees up return to No. 1

Chilean Mark Tullo and Lee Westwood share the lead after day one of the Scottish Open with Brit eyeing up top ranking. 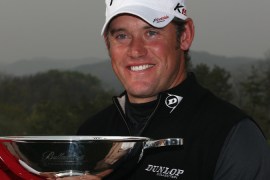