Asian fans had waited almost 15 years for an apology from the former English Premier League star.

And this week, ex-West Ham and Everton striker Tony Cottee finally laid to rest the controversy that had been brewing since he became the Malaysian League’s biggest ever signing in 1996.

Cottee put many noses out of joint with his less than complimentary observations about the level of sports’ professionalism in Southeast Asia.

He wasn’t happy that he had to clean his own boots, that he saw mushrooms growing on some of the pitches he played on and that his Muslim roommate’s early morning prayers regularly woke him at 5am.

Malaysian fans were still grumbling about the oft-quoted comments when Cottee made a return to Kuala Lumpur this week to work as a TV pundit. He says that while his infamous remarks weren’t inaccurate, they were taken out of context, isolated from the positive statements he made about his Asian sojourn.

“I apologise… I should have known better. But that’s how newspapers work, not just in Malaysia. In England, it’s even worse.

Cottee stunned the sporting world when he went from the English Premier League with West Ham United under Harry Redknapp to Selangor, near Kuala Lumpur, for a fee of approximately $1.2 million in October 1996.

Aged 31 at the time, he had scored 182 top-flight league goals over 14 seasons with the Hammers and Everton.

“More mushrooms than magic” was how one humourist described Cottee’s 10-month spell with the Red Giants, but his stats are more than respectable: 14 goals in 24 league matches and two trophies, the Malaysia and FA Cups.

At the time, it was the first significant silverware he’d ever won.

“Did I enjoy the football? No. Did I enjoy being in Malaysia? Yes,” he remembers.

“Different culture…. I had a great time. My twin boys were conceived here. So I will always have great affection for Malaysia.

“I just wish the Selangor fans would remember the goals and the trophies we won. I moaned about having to clean my boots, because I hadn’t done that since I was an apprentice when I looked after Frank Lampard Senior. And then when I was a pro, a young Rio Ferdinand cleaned my boots.”

When he returned from Asia in the summer of 1997, Cottee was England’s forgotten forward, who some expected to fade into oblivion.

But his career was rescued by fast-rising manager Martin O’Neill, who signed him at Leicester City.

In the Indian summer of his career, Cottee got his first taste of the European stage in the UEFA Cup and finally won a major English trophy when Leicester lifted the 2000 League Cup.

Eighty-five league games for the Foxes yielded a respectable return of 27 goals, including the winner against Manchester United at Old Trafford in 1998.

He had a brief stint in coaching, taking over as player-manager of fourth-tier Barnet in the 2000-2001 season.

But despite Barnet winning their first game under him by seven goals, Cottee resigned a few months later from the club on the outskirts of London, who were facing relegation from the Football League.

When he followed that up with a brief spell at third-tier Millwall, Cottee became the first player in more than a decade to have played for a different team in each of England’s four divisions. His seven national caps came between 1986 and 1989 when he and Scotland rep Frank McAvennie formed a much-feared strike partnership at West Ham.

Soon after retirement, he got a job as a weekend TV pundit with Britain’s Sky Television, focusing on the NPower Championship where his beloved West Ham find themselves after last season’s relegation under Avram Grant. But they’ve enjoyed improved fortunes since Sam Allardyce took over as manager.

“Sam is doing a good job and the club is heading in the right direction again,” he said.

Now Cottee is as a seasoned TV pundit, who transitioned seamlessly from magazine to couch to cafe shows this week with Asian satellite network Astro SuperSport.

Becoming more aware of how the media works, he can easily see how seemingly innocuous comments about mushrooms and dirty boots can be blown out of proportion on the other side of the world.

“That’s how it is sometimes,” he said.

“I’m not the first footballer to leave a club in controversy. When Sol Campbell joined Spurs from Arsenal, he received a 100 times more abuse.” 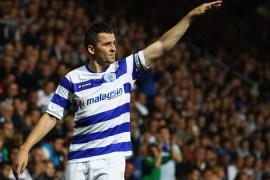 Cashing in on the English Premier League

Show me the money: Asian investors target the smaller Premier league clubs in a bid to get a slice of the action. 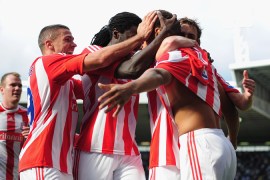 Coates and Coates wearing it well

Stoke City show their ambition in the English Premier League as manager Peter Coates splashes out. 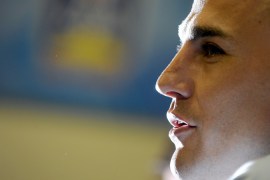