Barcelona went top on Sunday after labouring to a 1-0 victory at bottom club Sporting Gijon for their first away win in Spain’s Primera Division this term.

Xavi hammered a long-range shot against the post after 12 minutes and Adriano Correia put away the rebound, but Barca were far from their best and a third successive away draw was always a possibility as a combative Sporting made life uncomfortable.

The champions moved on to 14 points from six games and were ahead of second-placed Levante on goal difference, after one of the season’s surprise early form teams beat another, Real Betis, 1-0 away.

Juanlu’s volley went into the net off the legs of Betis goalkeeper Casto Espinosa in the 33rd minute and from there on their rugged defence held firm to maintain their unbeaten start  to the campaign.

The Valencia-based club, who claimed the scalp of Real Madrid two weeks ago, were one point ahead of Malaga and Valencia who both won on Saturday.

Sevilla went fifth with 12 points, ahead of their city rivals Betis on goal difference, after a 0-0 draw at Atletico Madrid thanks to the efforts of goalkeepers Javi Varas and Thibaut Courtois.

In the midday kickoff, Real Sociedad’s Inigo Martinez scored from inside his own half in the Basque derby, but Fernando Llorente’s brace made sure Athletic Bilbao earned a 2-1 win at the home of their north-coast rivals.

Centre back Martinez let fly from over 50 metres out and caught Gorka Iraizoz off his line, the visiting keeper perhaps distracted after one of his defenders had just been carried off on a stretcher.

Spain striker Llorente had put Bilbao ahead, turning in the area to score in the 34th minute, before Martinez levelled just past the hour mark in a sun-soaked San Sebastian.

Bilbao climbed out of the bottom three to five points from six games, two behind their hosts in ninth. 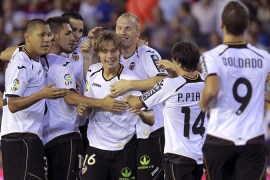 Valencia move to the top of Spain’s Primera Division with a 1-0 home defeat of lowly Granada. 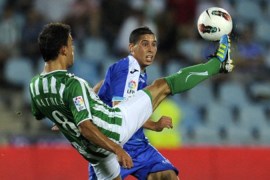 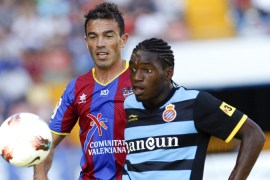 Levante continue their dream start in Spain’s Primera Division with a 3-1 victory over Espanyol.