The All Blacks put aside the massive blow that star playmaker Dan Carter was out of the World Cup Sunday as they led the top eight teams into the quarter-final shootout amid a rising injury toll.

They face Argentina in their first sudden-death game next weekend in their quest to end a 24-year World Cup drought without talismanic fly-half Carter who suffered a serious groin injury during kicking practice.

Australia were confirmed as quarter-finalists to play South Africa after Ireland dashed Italy’s hopes of squeaking into the play-offs which left the Irish with an encounter against a Wales side growing in confidence.

England, again faced with the distraction of off-field ill-discipline, play a struggling France who qualified despite a shock loss to Tonga.

Carter, who was to have captained the All Blacks in the absence of McCaw who has suffered the recurrence of a foot injury, was ruled out of the match just hours before kick-off.

He joined a growing list of players sidelined in the gruelling six-week tournament with South Africa and Australia rushing in replacements to prop up their injury-depleted sides, and England sweating on the fitness of Jonny Wilkinson.

“Obviously it’s a tragedy but we just need to show strength in this situation,” said coach Graham Henry whose All Blacks looked the most potent side in pool play despite constantly changing their line up to cover for injuries.

Henry also gave a ringing endorsement for Carter’s understudy Colin Slade who produced a patchy performance after being rushed into the starting line up to play Canada saying “the more we can play him, the better he’s going to get.”

The Springboks called in fullback Zane Kirchner as a replacement for Frans Steyn who injured a shoulder in the closing minutes of their bruising 13-5 victory over Samoa.

The Wallabies summoned Lachie Turner and Matt Hodgson to bolster their ranks after Drew Mitchell and Wycliff Palu both succumbed to hamstring injuries.

England have a cloud over Wilkinson and Mike Tindall who were injured in their narrow win over Scotland, French centre Aurelien Rougerie has a serious shoulder injury and Argentina’s inspirational Felipe Contepomi continues to struggle with a rib injury.

England’s focus on the World Cup was sidetracked by Tindall admitting his recollection of events with a woman in Queenstown “was inaccurate” and the team have also apologised for an incident at their hotel in Dunedin.

Tindall, newly married to Zara Phillips, granddaughter of Britain’s Queen Elizabeth II, had insisted he returned to the team hotel alone after he was filmed with a woman in a bar in Queenstown

But he was forced to backtrack when photos emerged of the extended night out with the same woman in another bar where The Mail on Sunday newspaper said they “behaved like a smooching teenage couple.”

“His recollection on his whereabouts that night was inaccurate and he has issued a statement apologising. He did not mean to mislead anybody,” manager Martin Johnson said.

Johnson also admitted he had to apologise to the manager of the team’s Dunedin hotel and reprimand three players after a woman claimed she was lured to a bedroom and “humiliated”.

Britain’s Sunday Mirror identified the players as James Haskell, Dylan Hartley and Chris Ashton who shouted lewd comments at the woman and filmed her.

“We apologised at the time. They now realise they stepped over the mark and they had no idea how upset she subsequently became,” Johnson said.

Argentina confirmed their entry into the play-offs, and finished second to England in Pool B ahead of Scotland, when they made heavy work of beating a plucky Georgia 25-7.

Wales finished second in Pool D behind South Africa with a classy 66-0 win over Fiji, scoring nine tries in wet and blustery conditions to suggest they are hitting form at the perfect time.

Ireland buried their poor form going into the tournament by beating Italy 36-6 to finish top of Pool C in a result that consigned Australia to play Tri-Nations rivals South Africa. 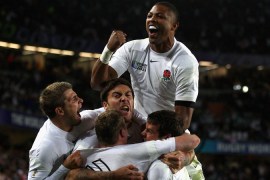 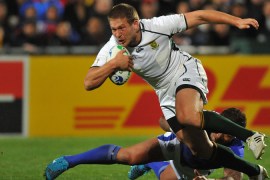 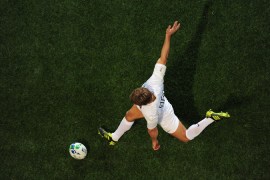 The RFU hand out light sentence to coaches for tampering with balls although promise next time they will come down hard.