Robin van Persie lifted the gloom around Arsenal as the Dutch forward’s double, which included a 29-second opener, clinched a much-needed 2-1 win over Sunderland at the Emirates Stadium on Sunday.

Van Persie insisted in the club’s matchday programme that he has no intention of following Cesc Fabregas and Samir Nasri out of the Emirates and then underlined his commitment with a man of the match display capped by a brilliant winner with just eight minutes left.

Arsene Wenger’s side kicked-off just two points above the relegation zone after their worst start to a season for 58 years.

But Arsenal will always be a threat while they have van Persie and the Gunners captain showed his class with a cool finish after only 29 seconds.

Sunderland gave the ball away from the kick-off and when Gervinho crossed low into the penalty area, van Persie dummied Wes Brown before firing past Simon Mignolet to score the club’s fastest ever Premier League goal and the quickest in the top-flight this season.

Szczesny then had to make a fine stop from Lee Cattermole’s close-range header to deny Sunderland a second goal.

But van Persie saved his best until last as he stepped up to bend a superb free-kick over the Sunderland wall and into the top corner in the 82nd minute.

That was enough to give Arsenal only their third win in eight league games and lift Wenger’s men into 10th place, while struggling Sunderland are above the relegation zone on goal difference.

“We had a good start for 25 minutes but as soon as Sunderland equalised the confidence started to wobble a bit,” Wenger said.

“The second half was all us but we needed something special from Robin van Persie to make the difference.”

Shola Ameobi came off the bench to preserve Newcastle’s unbeaten start to the season with a late equaliser in his side’s 2-2 draw against Tottenham at St James’ Park.

Senegal striker Ba equalised with his fifth goal in three games when he stabbed a Jonas Gutierrez cross goalwards in the 48th minute and goalkeeper Brad Friedel couldn’t prevent it crossing the line.

Jermain Defoe restored Tottenham’s lead with a brilliant turn and shot that flashed past goalkeeper Tim Krul from the edge of the area in the 68th minute.

But Alan Pardew’s fourth placed team have developed a resilient streak this term and substitute Ameobi equalised with a thunderous left-footed drive across Friedel in the 86th minute.

Earlier on Sunday, West Bromwich Albion climbed out of the relegation zone after defeating bitter rivals Wolves 2-0 in the Black Country derby at the Hawthorns.

Roy Hodgson’s side started the day third bottom of the table with just one win in their seven league games, but goals from Chris Brunt and Peter Odemwingie ended that dismal run and earned the bragging rights over their hated neighbours.

Brunt opened the scoring early in the first half and Nigerian striker Odemwingie came off the bench in the closing stages to clinch Albion’s first top-flight win against Wolves since 1982.

While Albion are finally on the up, Wolves have slipped below their rivals after five successive league defeats – their worst sequence at the top level since 1984. 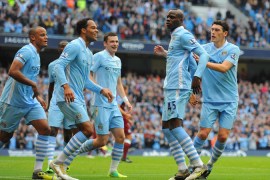 Man City hit four to shoot to top of table 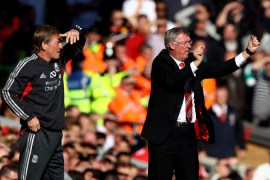 The game Alex Ferguson rates as biggest in club football ends in a whimper after honours shared between United and Reds.