Gonzalo Higuain scored his third straight hat trick to lead Real Madrid to a 4-1 win over Real Betis on Saturday in the Spanish Primera Division.

After an evenly matched first half, Madrid dominated the rest of the way as Higuain broke through early in the second half and Kaka soon doubled the lead at the Santiago Bernabeu stadium.

Striker Jorge Molina pulled one back for Betis, but Higuain scored twice more in four minutes to secure the win.

The 23-year-old Higuain has scored three hat tricks in 15 days – two with the Spanish giants and one with Argentina – and his eight goals this season ties him for the league lead with Barcelona’s Lionel Messi.

Elsewhere, Tomar Hemed’s injury-time penalty kick salvaged a 1-1 draw for Mallorca against visiting Valencia in the debut of coach Joaquin Caparros, while Villarreal drew 0-0 at Getafe as both teams continue to disappoint.

France defender Adil Rami scored from a corner to put Valencia ahead in the 39th, but Hemed converted his third spot kick in two games to split the points in the 93rd after Mehmet Topal handled the ball in the area.

Later, Atletico Madrid look for their first win in three games as they play Granada.

In the Spanish capital, Kaka extended his return to form to again make Madrid’s starting 11 alongside Germany playmaker Mesut Oezil, while Higuain got the nod over Karim Benzema, who returned to the squad after injury.

Higuain, who had lost his starting job to Benzema, has found his scoring form after a back injury sidelined him for a large stretch of last season.

Early on, Betis showed the same attacking style that led the promoted side to begin the season with four straight wins, only to later collapse in defense and record their third consecutive loss.

Winger Alvaro Vadillo, 17, tested Madrid goalkeeper Iker Casillas with a low shot in the opening seconds, and a poor pass by Oezil led to Ruben Castro drawing a block from the Spain captain in the 12th.

Betis briefly lost their spark after Vadillo went down with a leg injury and had to substituted.

Higuain moved over the right side for Cristiano Ronaldo to spearhead the attack and the Portugal forward came close with a header off Higuain’s cross in the 22nd.

But Madrid again bogged down in attack and left Castro unmarked in the area in the 41st to just miss with a volley.

Less than a minute into the second half, Marcelo caught the Betis defence flat-footed with a long pass over the top that Ronaldo chased down inside the area and laid on for Higuain to tap home.

Once ahead, Madrid rolled. Kaka extended the lead in the 59th with a trademark curling right-footed strike around the goalkeeper into the far side of the net after Ronaldo found him on the left side of the area.

Molina fired in a pass from Castro to give Betis a moment of hope in the 69th, but Higuain added a pair of assists in the 70th and 73rd from fellow Argentina international Angel Di Maria to keep Madrid perfect at home. 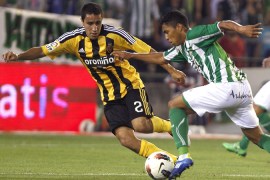 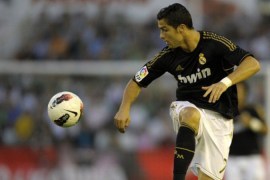 Draw leaves Spanish giants with a return of just one point in their last two Primera Division matches. 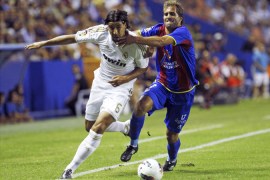 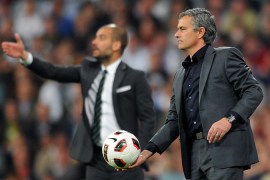 The continued dominance of Barcelona and Real Madrid in the Primera Division is a growing concern for Spanish football.