Inter Milan’s crisis deepened on Saturday as they were beaten 2-1 at Catania leaving them with just four points from six Serie A matches this season.

Depending on Sunday’s results, the 2010 Champions League winners could even finish the weekend in the relegation zone.

Inter took an early lead through Esteban Cambiasso but two goals in the space of four minutes at the start of the second period turned the game on its head.

Sergio Almiron restored parity on a break-away and then Francesco Lodi notched the winner from the penalty spot.

It means Inter have won just two games this season in nine matches in all competitions, including August’s Italian Supercup, having lost six of those.

It also brought to an end coach Claudio Ranieri’s positive impact on the team since taking over from Gian Piero Gasperini.

Having won his first two games, he has now lost two in a row, including the 3-0 home defeat to Napoli two weeks ago.

Ranieri, though felt it was too soon to talk of a crisis.

“We have to see, we said in the preparation for this game that we have to get points,” he said.

“We haven’t managed it, we’re going home with no points and it hurts. In the first half we were very compact, we paid attention but in the second we conceded two counters at the beginning.

“Obviously no-one is happy, we want to react, the lads are disappointed and me too, that’s normal.”

Catania coach Vincenzo Montella felt his team could have won by a wider margin.

“You have to remember that we were playing Inter and it gives me great pride to play this way against a great team,” he said.

“We always tried to push the game and I can say we deserved to win, even though if we’d been more clinical it could have been more comfortable.”

In a low-key first half the only real chance of note resulted in a goal after just six minutes.

Following a smart exchange with Dejan Stankovic, Maicon crossed from the right and Cambiasso arrived at the back post to hit a firm volley that bounced past Mariano Andujar, who got a touch but not a firm enough one.

The game really exploded into life at the start of the second half as Gonzalo Bergessio broke from deep, holding off Lucio, before slipping the ball wide to Almiron who finished crisply across Luca Castellazzi.

Moments later, Castellazzi gave away a penalty for a foul on Bergessio, although television replays suggested there had been no contact between the pair.

Castellazzi was booked and Lodi stepped up to score from the spot.

But the goalkeeper protested against the penalty award.

“It wasn’t a penalty, I didn’t touch anything with my hands, he left his legs back looking for contact,” he said.

Mauro Zarate went down in the opposite box but the referee booked him for a dive, although there seemed to be little difference between that incident and the one involving Bergessio.

Zarate then tried a shot from outside the box but Andujar saved.

Up the other end Gennaro Delvecchio had a chance with only Castellazzi to beat but the goalkeeper made himself big and got his legs in the way of the shot.

Andrea Castellani had a chance to close out the game nine minutes from time when he was sent scampering clear down the left but he seemed unable to make up his mind what to do in front of Castellazzi and when finally he did shoot, the goalkeeper made a fine one-handed save.

In stoppage time Sulley Muntari slipped the ball to Cambiasso inside the box but the Argentine midfielder wasted time switching the ball onto his left foot and was crowded out. 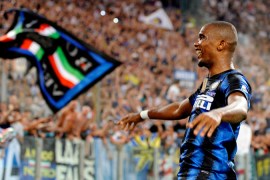 Eto’o linked with move back to Inter Milan 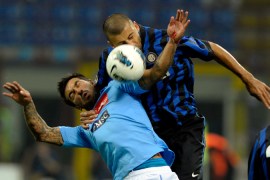 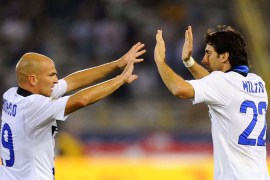 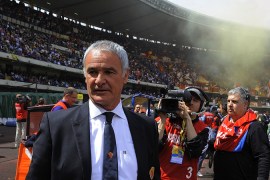