Skipper Mahendra Singh Dhoni led from the front as beleaguered India redeemed themselves with a 126-run win over England in the first one-dayer in Hyderabad on Friday.

Dhoni smashed an unbeaten 87 off 70 balls to power the injury-ravaged world champions to 300-7 after he won the toss and chose to bat on a sluggish wicket at the Rajiv Gandhi International Stadium.

England, fresh from their overwhelming success over India at home, were shot out for 174 in 36.1 overs to hand India the early lead in the five-match series.

Captain Alastair Cook top-scored with 60, but England lost their last eight wickets for 63 runs after being comfortably placed at 111-2 in the 23rd over.

Cook said losing the toss was crucial as batting became difficult in the second session.

“It was important to win the toss because we saw at the end that the ball kept low,” the England captain said.

“But India out-performed us today.

“We’re going to have to learn from this, and that’s the beauty of a five-match series. We know playing spin is an issue, and that’s a skill thing.

“We’re going to work hard on that in the next couple of days.”

Due a good game

Dhoni, who was named man of the match, admitted the absence of dew in the evening helped his side.

“There had been a fair amount of dew the previous few evenings and that’s why we played three seamers,” the Indian captain said.

“It was good the dew did not come into play tonight.

“We were looking to make 250-260 because that would have been a good total on this wicket. Of course dew would have made it easier for the side batting second.

“I am happy Jadeja has improved a lot and it is good to have a bowler like Yadav in the side because he is one of the fastest we have in the country and hits the deck hard.

“We have to show the same intensity in the remaining matches,” said Dhoni, whose team was been blanked 4-0 in the Tests and 3-0 in the one-dayers on their recent tour of England.

India, playing their first international at home since the World Cup triumph in April, were without star batsman Sachin Tendulkar and at least six other regulars, due to injury or poor form.

The hosts defended the total with a new-look bowling attack in which three specialists, Vinay Kumar, Yadav and Ashwin, had played only 25 one-dayers between them before Friday’s match.

Jadeja turned the match around by removing both batsmen in successive overs, Cook holing out in the deep and Trott being bowled to make England 120-4.

The tourists slipped further to 134-7 as Ashwin dismissed Ravi Bopara and Tim Bresnan and Jadeja took care of the highly-rated Jonathan Bairstow.

Earlier, Suresh Raina made 61 off 55 balls and added 72 for the fifth wicket with Dhoni after India were reduced to 123-4 by the 29th over.

Jadeja chipped in with 27 off 22 balls at the end as India hammered 91 runs in the last 10 overs.

The second one-dayer will be played in New Delhi on Monday. 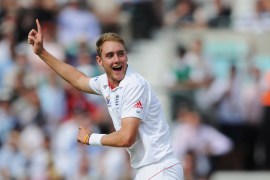 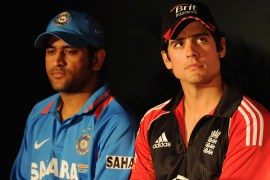 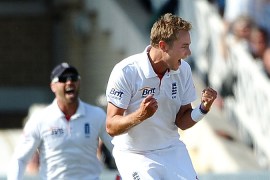 After impressing with the bat, Stuart Broad uses the ball to help England whittle down India following a Dravid century. 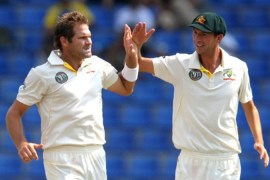 Sri Lanka are once again on the backfoot against Australia after being bowled over on the first day of second Test.