India captain Mahendra Singh Dhoni gets a chance for revenge against England when he leads his team in a one-day series starting in Hyderabad on Friday but his team is still handicapped by injuries.

India were beset by injuries on their recent tour of England when they failed to win a single game, and Dhoni must hope that being back on home soil will help redress the balance between the two teams.

Dhoni leads his team at home for the first time since India won the World Cup in April.

Opener Gautam Gambhir makes a return but others like batting star Sachin Tendulkar, big-hitter Virender Sehwag, pace spearhead Zaheer Khan, allrounder Yuvraj Singh and seamer Munaf Patel are not in the team for the first two games in Hyderabad and New Delhi because of injuries.

Spinner Harbhajan Singh has been dropped after some unimpressive performances in international cricket, leaving the bowling attack woefully short of experience.

The pace bowling attack led by Praveen Kumar lacks experience, with Varun Aaron and left-armer Sreenath Aravind still to be capped and Vinay Kumar and Umesh Yadav yet to prove themselves.

“Compared to the past, they are an inexperienced side and the bowling in particular looks depleted in the absence of Zaheer Khan and Harbhajan Singh,” Cook said on arriving in India.

“But their players know the conditions well.”

England, who were involved in a high-scoring last-ball tie in their last game against India on Indian soil during the World Cup in Bangalore, have warmed up well by winning two practice games played with new ICC rules that include the use of two new balls – one from each end.

The team is here without injured allrounder Stuart Broad and experienced seamer James Anderson who has been rested, leaving Tim Bresnan and Steve Finn to carry the responsibility of bowling along with off-spinner Graeme Swann.

England’s batting though looks more settled with Kevin Pietersen getting a chance to consolidate his position after being rested for the home one-day series against India.

Ravi Bopara struck a neat 73 in a 56-run win over local side Hyderabad XI in the team’s first practice game, while Jonny Bairstow’s blistering 104 not out off 53 balls capped a string of good batting performances by Cook (85), Jonathan Trott (74) and Craig Kieswetter (71) that helped win the second by 253 runs.

In bowling, pace bowler Finn produced a hat-trick in the first game while upcoming leg-spinner Scott Borthwick claimed 5-31 in the second to test conditions at the Rajiv Gandhi Stadium which will host the first game on Friday. 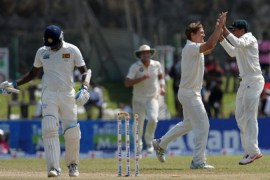 Australian cricketer Shane Watson is worried about the damage the current match-fixing trial is doing to cricket. 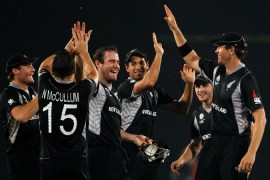 New Zealand spinner Nathan McCullum talks to Al Jazeera about hopes for Zimbabwe tour and how cricket can rival rugby. 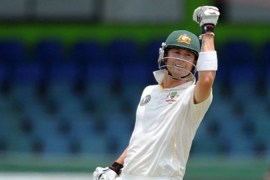