China’s dominance of the world gymnastics championships continued on Wednesday in Tokyo with a fifth straight gold medal to edge Japan and the United States.

China have dominated men’s gymnastics over the last decade, winning every world title since 2003 as well as two of the last three Olympic golds.

Looking vulnerable after finishing behind both Japan and the United States in qualifying, the Chinese looked anything but ordinary as they walked off the floor holding their index fingers in the air, No. 1 yet again.

Sitting a close third with two events to go, China pulled away with spectacular showings on high bar and floor exercise led by Zhang Chenglong.

The defending high bar champion managed great height on his release moves and landed each easily.

Uchimura peeled off on a somersault high above the bar for his routine to fall short of Zhang’s, but it was still difficult enough to keep the Japanese ahead of the Americans, who were undone by errors.

Jonathan Horton landed his vault on his knees, his face buried in the mat, while 18-year-old John Orozco looked unsteady on still rings.

Still, the Americans will come away encouraged for next summer’s London Olympics following their first medal at the worlds since a silver performance in 2003. 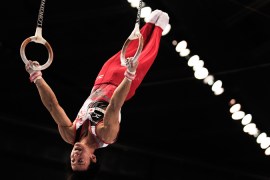 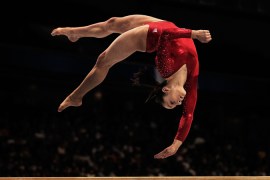 US team spring to top in Tokyo

The US team top qualifying at the world gymnastic championships ahead of Russia as both secure places at the Olympics. 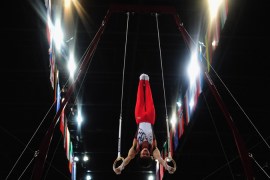 Formula One and ATP tennis visit Japan this week but there’s another event set to bring a spring back to nation’s step.