Tiger Woods was sure to make news at CordeValle in his first tournament in seven weeks. Only it wasn’t from any of his scores or any of his shots. It was from a hot dog.

Even when he returned to golf last year after a sex scandal, Woods heard only the occasional heckle from the crowd or saw a plane toting a saucy message on a banner. But as he stood over a putt on the seventh green toward the end of his final round in the Frys.com Open, he heard a commotion from security and saw remnants of a hot dog being tossed in his direction.

“When I looked up, the hot dog was already in the air,” Woods said.

Woods hadn’t played on the PGA Tour since the middle of August, when he missed the cut at the PGA Championship amid growing questions about whether he could get his game back to where it once was, or even come close to that standard.

His golf looked much improved.

After playing only six rounds since the Masters while letting injuries to his left leg fully heal, he overcame a sloppy opening 73 with three straight 68s – the first time he has had three rounds in a row in the 60s in more than a year on the PGA Tour. That amounted to progress, just not up the leaderboard.

Woods wound up 10 shots behind in a tie for 30th in what will be his final PGA Tour event of the year. Still to come is the Australian Open on November 10-13, followed by the Presidents Cup at Royal Melbourne.

The winner was Bryce Molder, an All-American all four years at Georgia Tech who joined the tour in 2002 and had to wait nearly a decade – this was his 132nd tournament – to win.

Molder holed a 12-foot birdie putt on the 18th that got him into a playoff with Briny Baird. Molder outlasted Baird on the sixth extra hole, the longest playoff on tour this year, by making a 6-foot birdie putt.

It was a big disappointment for Baird, 0 for 348 on the PGA Tour. He went over $12 million in career earnings, the most by any player who has never won.

Even so, Woods managed to produce the most bizarre moment in what already is a strange year.

He stood over an 18-foot birdie putt late in his round when a 31-year-old man, whose name wasn’t released, yelled out his name and tossed the hot dog in his direction. Woods backed off his birdie putt, then quickly resumed play. He missed the putt.

“Some guy just came running on the green, and he had a hot dog, and evidently… I don’t know how he tried to throw it, but I was kind of focusing on my putt when he started yelling,” said Woods, who didn’t seem bothered by it.

“Next thing I know, he laid on the ground, and looked like he wanted to be arrested because he… put his hands behind his back and turned his head.”

“He was very cooperative,” Cardoza said.

“They said, ‘Why did you do this?’ He just shook his head in guilt or remorse. He didn’t give a reason why he did it.”

Cardoza said the man claimed he wasn’t throwing the hot dog at Woods, rather tossing it in the air. He said the man acknowledged having a drink earlier in the day, but that the man was not drunk.

Arjun Atwal, who played with Woods, said he was concerned for a moment at the sight of a fan yelling out Woods’ name and approaching the green.

“They could have shot him,” Atwal said.

“The cops could have thought it was something else.”

It was high drama, albeit briefly, an example that Woods attracts attention simply by being at a tournament.

The longest playoff of the year. The first win for Molder. There was even 21-year-old Bud Cauley shooting 66 to finish third, which likely will be enough for him to become only the sixth player to get a PGA Tour card without going to Q-school.

And a hot dog steals the show.

“It was bizarre,” said Rod Pampling, who also played with Woods.

“This guy comes running out with a hot dog in his hand, and then he lays down and puts his hands behind his back.”

Woods said he never felt threatened because he was on the back end of the green and the fan never got close to him. He heard the commotion of security behind him, and when he looked up, the hot dog already was in the air.

“I guess he wanted to be in the news,” Woods said.

When he finished with a final birdie, any seriousness of the incident gave way to levity. Dan Diggins, head of security for tournament sponsor Frys Electronics, said the man would be arrested for “everything” and described him as “just an idiot.”

“That could have been really bad.”

The rest of Woods’ round wasn’t nearly as eventful. He did get on the leaderboard, before the leaders teed off, with four birdies in his opening six holes. But he missed the 16th green and made bogey, and after an easy birdie on the 17th, didn’t make another one until his final hole on the par-5 ninth. He attributed that to not enough play.

Because of injuries to his left leg this year that are finally healed, Woods now has played only 10 full rounds since the Masters.

“I haven’t played much,” Woods said.

“That comes with competitive flow, understanding the situations and feels, and game time is a little bit different.”

He is hosting a tournament at Pebble Beach next week to raise money for his foundation, and he said “family obligations” would keep him from playing the season-ending tournament at Disney. 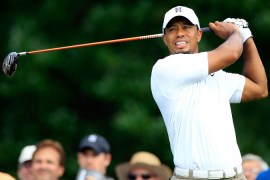 Returning to competition for the first time since May, Tiger Woods has a mixed second round at Bridgestone Invitational. 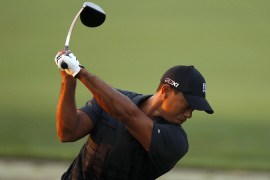 Woods gets back into the swing of it

After hobbling away from The Players Championship in May, Tiger Woods is ready to win back his reputation. 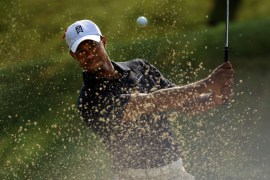 Woods out of British Open

Tiger Woods isn’t out of the woods yet – this time a leg injury rules the American out of the British Open. 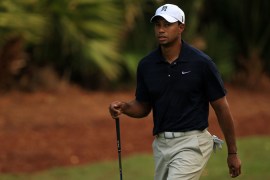 Golfer pulls out of Players Championship due to injury after slipping to six over par in opening nine holes.