The Red Bull driver, 24, who needed just one point to clinch the title, joins Juan Manuel Fangio, Ayrton Senna and Michael Schumacher as one of only nine drivers to successfully defend the world title.

He ran down the pit lane to celebrate with his mechanics after the race, which sealed the championship with four grands prix remaining following a dominant season including nine wins in 15 outings.

Button’s victory, which came after he passed Vettel in the second round of pit stops on lap 21, was his third of the season and the 12th of his career.

Schumacher was sixth for Mercedes, briefly leading the race after the final round of pit stops, while Massa was seventh.

Mexican Sergio Perez came through from 17th on the grid to take eighth for Sauber with a two-stop strategy, while German Nico Rosberg drove his Mercedes from second-last on the grid to finish 10th.

Button needed to win the final five races of the season and have Vettel not score a point to extend the championship to next weekend’s race in South Korea, and he made a strong start, shaping up to pass Vettel into the first corner.

But the German defended robustly, prompting Button to tell his McLaren team over the radio that “he’s got to get a penalty for that”.

But stewards decided to take no further action.

Vettel led the race through the first set of pit stops, but after re-passing Hamilton on lap eight, Button closed the gap and passed the German as he returned to the track following his tyre-change on lap 21.

On the following lap, Hamilton and Massa clashed at the final chicane, with a piece of front wing from Massa’s car left in the middle of the circuit, prompting a three-lap safety car period to remove the debris.

The incident was investigated, but no action was taken. The clash was the latest in a series of incidents this year between the pair, with Hamilton running into the back of Massa in the most recent race in Singapore.

Button took control of the race after the lap 28 re-start, setting a new fastest lap on three successive laps as he extended his margin to 2.5secs.

He briefly relinquished the lead to Schumacher as the German waited until lap 41 until making his final stop for tyres, and then maintained a gap of more than a second despite Alonso closing rapidly in the final laps.

Button set the fastest lap of the race, 1:36.568, on the 52nd of 53 laps to underline the pace he had in reserve as McLaren celebrated their fifth win of the year.

Alonso used his own final stop to leap past Vettel, but third was enough to cement a second straight title for the German.

With four races left in the season, Vettel has 324 points, with Button’s victory keeping the Briton in second place in the championship with 210. Alonso retains third on 202, while Webber stays fourth with 194. 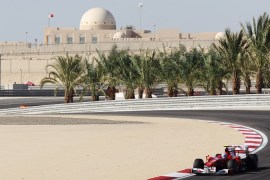 Bernie Ecclestone made a difficult decision to cancel Bahrain GP but now concerns are growing over next season’s race. 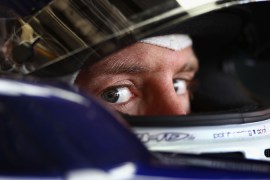 Red Bull’s Sebastian Vettel has his eye firmly on the world championship title as he starts on pole in Japan. 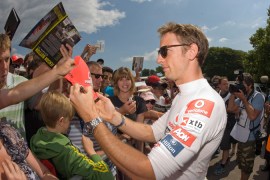