Angola, Ghana, Guinea, Libya, Mali, Niger, Tunisia and Zambia qualified for the 2012 Africa Cup of Nations on Saturday while Nigeria and South Africa were eliminated after a day of drama and confusion.

South African footballers, coaches, supporters and media celebrated after a 0-0 home draw with Sierra Leone believing Bafana Bafana (The Boys) had made it only to discover later that little Niger had topped the table on the head-to-head rule despite a 3-0 drubbing in Egypt.

The eight qualifiers join co-hosts Gabon and Equatorial Guinea, Botswana, Burkina Faso, Ivory Coast and Senegal at the biennial African football showcase during January and February with the final two slots to be filled on Sunday.

Although Zambia and Libya failed to score in Copperbelt town Chingola, the 0-0 draw took the home team through as a group winner while the North Africans took one of two places reserved for the best runners-up.

It was a remarkable achievement for the Libyans as fighting between pro and anti-Moamer Kadhafi forces meant the national team played only one of three home fixtures in Tripoli with Mali and Egypt hosting the others.

Only results against first and third-place finishers in four-nation groups count in the battle for the runners-up slots and Libya amassed eight points by taking four each off Zambia and Mozambique.

Nigeria took a maximum six points from Madagascar after 2-0 victories at home and away, but these were not considered because the Indian Ocean islanders finished bottom of the pool with a solitary point.

Sudan will be the other runners-up to make it to the finals unless Group D leaders Morocco defeat Tanzania in Marrakech on Sunday but drop to second place behind Central African Republic in Group D and Algeria come last.

Early goals from Asamoah Gyan and John Mensah earned four-time champions Ghana a 2-0 victory in near 40 degrees Celsius temperatures in Sudan and top place in their group with 16 points from six matches.

Ibrahima Traore levelled in the final minute as Guinea salvaged a 2-2 draw against Nigeria after a dramatic second half in Abuja saw Ismael Bangura put the visitors ahead before goals from Obinna Nsofor and Ikechukwu Uche swung the game in favour of the home team.

Angola won 2-0 in Guinea Bissau via goals from ‘Manucho’ and ‘Mateus’ to finish a point ahead of long-time group leaders Uganda, who could only draw 0-0 at home against Kenya and so a 33-year wait to get back to the Cup of Nations continues.

Mali drew 2-2 in Liberia to pip Cape Verde Islands on the head-to-head rule and Tunisia, who triumphed 2-0 at home against Togo, were grateful to minnows Chad, whose last-gasp 2-2 draw prevented Malawi qualifying.

Ethiopia completed a miserable campaign for win-less Madagascar with a 4-2 win in Addis Ababa, Mozambique finally found their scoring boots to outclass Comoros Islands 3-0 in Maputo and Congo Brazzaville defeated Swaziland 1-0 in Lobamba in other early Saturday games.

Even the early second-half dismissal of defender Isaac Vorsah could not knock star-studded Ghana off course as they proved too strong for Sudan, who had surprisingly taken a point away from Kumasi last October.

James Chamanga struck the woodwork for Zambia and Ahmed Zuway for Libya in a tense tussle confined mainly to midfield and both teams knew well before full-time that a draw would be mutually beneficial.

Nigeria had to win 1-0 or by a two-goal margin if Guinea scored to maintain a sequence of Cup of Nations appearances stretching back to 2000 after boycotting the 1996 finals in South Africa and being barred two years later.

And as the seconds ticked away and they led 2-1 it looked as if the Eagles would be strong candidates to be among the best two runners-up before Germany-based Traore struck and Guinea finished first with four victories and two draws. 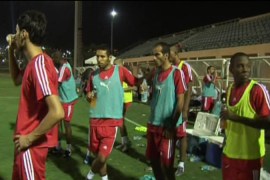 A sense of normality returns in part for Libyans as new national squad begin their AFCON campaign. 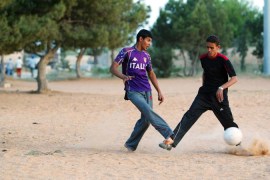 Following the political and civil unrest in Libya, South Africa has agreed to host the African Cup of Nations in 2013.