New Zealand eased into the World Cup semi-finals with a sometimes nervous but ultimately comfortable 33-10 victory over a dogged Argentina team at Eden Park on Sunday.

The hosts will now return to Eden Park next Sunday to play Australia, who knocked out holders South Africa in the day’s first quarter-final.

France take on Wales in the other semi-final in Auckland on Saturday.

The Pumas kept New Zealand out until the 67th minute and the All Blacks were forced to rely on the kicking of Piri Weepu to rack up the points before forwards Kieran Read and Brad Thorn scored late tries.

Argentina, who finished third at the last World Cup, battled hard at the breakdown to slow the New Zealand ball and even took the lead at one stage after a try from Julio Farias Cabello.

There were flashes of brilliance from New Zealand wingers Cory Jane and Sonny Bill Williams as well as a typically wholehearted effort from Ma’a Nonu in the centres but in the end it was the All Black pack who secured the victory.

“That’s what we expected,” All Blacks skipper Richie McCaw said.

“We realised that come finals time it may take 80 minutes and I thought we played some good rugby.

“We started to get some reward with three points and we realised that if just kept chipping away we would get the chances.”

Weepu had assumed place-kicking duty from the start and converted penalties in the 13th and 26th minutes to put the All Blacks 6-0 ahead.

Number eight Read thought he had scored the first try of the match in the 18th minute but his toe grazed the touchline before he ploughed over in the corner.

In the event it was Argentina who left a packed Eden Park stunned when Cabello breached the New Zealand line in the 31st minute.

A thundering run from number eight Leonardo Senatore got the Pumas to within a couple of metres of the line and his fellow loose forward plunged over to score with Felipe Contepomi superbly adding the conversion.

The Puma’s 7-6 lead last just five minutes, however, before Weepu slotted another penalty to edge the home side ahead and another three points from the scrumhalf on the stroke of halftime sent the All Blacks into the break 12-7 up.

Argentina were not done yet, though, and centre Marcelo Bosch landed a huge penalty from the halfway line six minutes after the break only for Weepu to hit back with one of his own after 50 minutes.

McCaw, who played 73 minutes despite his troublesome foot injury, was denied a try by the television match official in the 58th minute but Weepu added his sixth penalty from in front of the posts.

The infringement also cost Pumas scrumhalf Nicolas Vergallo 10 minutes in the sin-bin and it was while he was sat on the sidelines that the All Blacks finally found a way through the powder blue and white defensive line.

There was an element of danger even to this, though, with Jerome Kaino’s pass almost being intercepted before Read gathered it in to canter over in the corner in the 67th minute.

Weepu failed to add the conversion – his first missed kick of the tournament – but he added his seventh penalty to extend New Zealand’s cushion to 26-10 before making way for Jimmy Cowan.

Lock Thorn put a gloss on the result three minutes from time with a second try for the All Blacks after a neat offload from flyhalf Aaron Cruden, who added the conversion to seal a fine performance as first-half replacement for the injured Colin Slade.

New Zealand fullback Mils Muliaina, who was playing his 100th Test, was also replaced at halftime because of injury, another concern for the hosts before they encounter their trans-Tasman rivals next week.

“I think it was competitive for 60 minutes then the All Blacks showed their magic and won well. But that’s rugby you know,” Pumas captain Contepomi said. 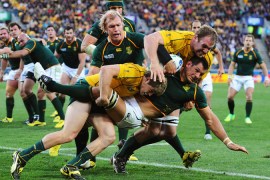 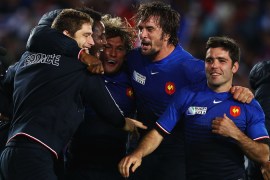