Jamaican sprint kings Usain Bolt and Yohan Blake have both been shortlisted for the 2011 World Athlete of the Year award, the International Association of Athletics Federations (IAAF) announced on Monday.

Blake won the world championships 100m title in Daegu last month when his world record-holding compatriot was disqualified for a false start.

And the duo sprinted to landmark times at the Diamond League last month, Bolt running the fastest 100m this year and Blake the second fastest 200m in history.

Britain’s Mo Farah has also made the cut after the 28-year-old won world gold in the 5,000 metres in South Korea and claimed silver in a closely fought 10,000m.

American triple-jumper Christian Taylor and compatriot Jesse Williams, who competes in the high jump, also made the shortlist.

The 10 male and 10 female candidates have been selected by an IAAF panel of eight experts with the winners to be announced on November 12. 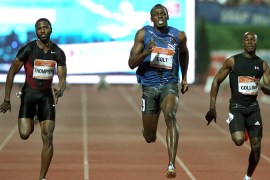 Putting his World Championships false start behind him, Bolt records fastest 100m of season in front of fans in Zagreb. 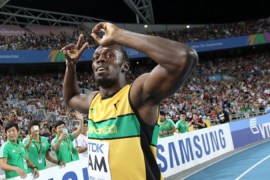 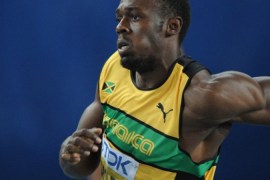 Bolt gets back on track

Usain Bolt eases into the 200 metre final at the World Championships in Daegu as Veronica Campbell-Brown takes gold. 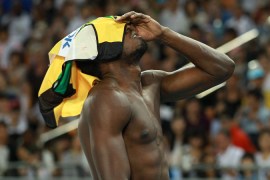 The world’s fastest man Usain Bolt is disqualified from the 100m final to help give compatriot Yohan Blake world title.