Chelsea’s hopes of retaining the English Premier League title looked as bleak as their coach Carlo Ancelotti’s future as the champions’ fall from grace continued with a 1-0 defeat at Wolverhampton Wanderers.

On a night when Manchester City emerged unscathed from a grilling at Arsenal to draw 0-0 and stay second in the title race behind Manchester United, Jose Bosingwa’s early own goal condemned Chelsea to a fifth defeat in 11 league matches.

In that period last season’s double winners have collected just 10 points and have slumped from top to fifth, nine points off the pace.

“I’m still confident but obviously I have to do better because this is not enough what we are doing at this moment,” Ancelotti told Sky Sports on Wednesday.

“This has been a long time, too long for our club and our team. Nothing is lost though and we have to compete in every competition. But it’s very difficult to come back and fight for the title now.”

Ancelotti finds himself in good company with several other managers appearing to be skating on thin ice at the end of frenetic spate of Christmas and New Year fixtures.

Under-pressure Liverpool manager Roy Hodgson accused his side of self-destructing as they lost 3-1 at Blackburn Rovers.

“It was a real shooting in the foot exercise,” Hodgson, who is the bookmakers’ favourite to become the next Premier League manager to lose his job, said.

“It was very difficult to go in two goals down at half time and we compounded that by conceding an equally poor third goal.”

Steven Gerrard, playing his 550th game for Liverpool, pulled a goal back for Liverpool in the second half after two goals by Benjani and one for Martin Olsson had put Rovers in command.

Gerrard also missed from the penalty spot to complete a miserable night for Liverpool who are in 12th place, just four points above the relegation zone.

Avram Grant’s West Ham United returned to the foot of the table after a 5-0 hammering at Newcastle United while Gerard Houllier’s prospects also look bleak as his Aston Villa side fell into the bottom three after a 1-0 home defeat by sixth-placed Sunderland.

Tottenham Hotspur wasted the chance to strengthen their place in the top four when they went down 2-1 at Everton, meaning it was a tremendous night for leaders Manchester United who have enjoyed full value from their 2-1 home victory over Stoke City on Tuesday.

United lead the table with 44 points from 20 games with City on 42 having played two games more. Arsenal are third with 40 from 21 and Tottenham have 36.

Wigan Athletic earned a point against Bolton Wanderers but remained in the relegation zone.

On Tuesday Ancelotti bemoaned his side’s blunders late in matches but they needed just six minutes to hand a gift to Wolves, who began the night bottom but ended it out of the relegation zone.

Stephen Hunt’s corner should have been cleared but instead the ball sliced off the shin of Boswinga and ended up in the net with keeper Petr Cech helpless.

Salomon Kalou went close to an equaliser before halftime and Didier Drogba was denied by the woodwork as Chelsea pressed but the visitors lacked belief as they suffered a first defeat by Wolves for 18 years.

Arsenal, attempting to reassert themselves as United’s main title rivals, dominated Roberto Mancini’s Man City but after some dazzling early play they ended the night frustrated.

Robin van Persie and Cesc Fabregas both struck shots against the post as City were given a first-half grilling and Theo Walcott had a strong penalty claim turned down when his cross struck the arm of Vincent Kompany.

The chances dried up, however, and the game ended in scrappy fashion and both sides down to 10 men after Bacary Sagna and Pablo Zabaleta were dismissed after a flare-up. 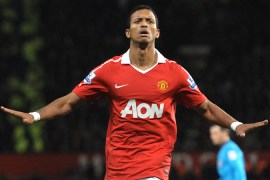 Man U create gap at top of EPL

Manchester United take a three point lead at top of English Premier League with a 2-1 win at home against Stoke City. 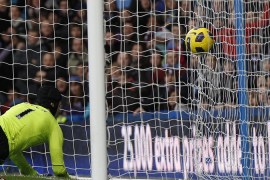 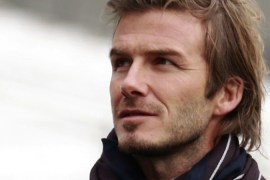 Redknapp: ‘Becks wants to join us’ 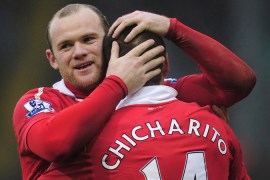 Utd and City stay level at the top