Lazio, Roma and Juventus all snatched late winners to keep their Serie A title hopes alive on a day of late drama in Italy.

Leaders Milan nervously responded by drawing 1-1 at Lecce in Sunday’s late game to remain four points clear at the top.

Milan lacked guile in the first half with Robinho and Andrea Pirlo missing and Ronaldinho sold, but as he so often does Zlatan Ibrahimovic opened the scoring with a brilliant opportunist strike from 30 yards early in the second half.

Lecce, who won at high-flying Lazio last weekend, hit the post before Ruben Olivera swept home following a corner on 82 minutes to grab a deserved point in their fight against the drop.

Milan also drew 4-4 with Udinese last Sunday as cracks begin to show in their title bid at the start of the second half of the season despite signing the mercurial Antonio Cassano.

Earlier Libor Kozak struck six minutes from time to earn third-placed Lazio a 1-0 win at home to Sampdoria and draw them level on points with second-placed Napoli, who drew 0-0 with Fiorentina the day before.

Roma left it even later and needed an own goal a minute from time from Maximiliano Pellegrino to steal a 1-0 success at Cesena.

Roma closed to five points off Milan with Juve a point further back and two ahead of Inter Milan, 4-1 winners over Bologna on Saturday.

The Serie A title race had looked to be thinning out until the late drama with Milan appearing to be the big winners before they slipped up in the southeast.

In Rome Christian Ledesma sent over an outswinging free-kick and Kozak darted behind the Samp backline to bag a header from close in.

Lazio coach Edy Reja was relieved his side came away with the win following last weekend’s home defeat to Lecce.

“Today we didn’t have a good first half which is strange given we normally play worse in the second period, today it was the other way around,” he told SkySport.

“But the important thing was to take home three points and find a bit of serenity.”

Roma’s winning goal in Cesena was a scrappy affair and owed a lot to  persistence and luck.

Substitute Marco Borriello took a ball down on his chest in a crowded box and sent a volley goalwards that crashed back off the bar.

Fellow sub Adriano, who may have been offside when Borriello shot, looked to have a simple tap-in but goalkeeper Francesco Antonioli made a miraculous save with the ball spinning up and seemingly heading out of play.

Simplicio turned the ball back into the danger area, although it looked to have already gone out, where Pellegrino inadvertently prodded it in.

“Every time we win away from home we say this could be the start of a title charge,” he said.

“It wasn’t easy, we’d never won here before. We played particularly well in the first half.

“We never gave up, not even a yard and I’m happy when the team keeps fighting to the end.”

Veteran Juve forward Alessandro Del Piero had already directed one set piece inches over the bar and forced goalkeeper Jean-Francois Gillet to tip another over when he curled a free-kick into the top corner just before the break.

Edgar Alvarez teed up Gergely Rudolph to equalise after a powerful run down the left.

But Aquilani pounced on a dropping ball to fire home a volley from the edge of the box to take home the three points.

After two straight league defeats in which they conceded seven goals, Juve boss Luigi Delneri was pleased with his troops.

“We managed the ball well to exploit our counter opportunities. We played in a distinguished manner in terms of quality, intensity and even emotion,” he said.

Elsewhere Sicilians Palermo’s hopes of qualifying for next season’s  European Champions League suffered a blow as they fell to a 3-1 defeat away to Sardinia’s Cagliari in the ‘derby of the islands’.

Udinese bagged four goals for the second week in a row as they won 4-2 at Genoa to move into Champions League contention. 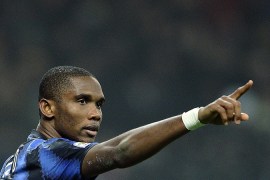 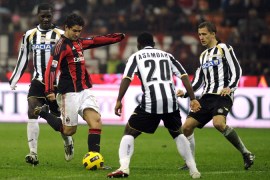 Milan’s lead in Serie A cut to four points as they draw 4-4 with Udinese while Napoli down Juve 3-0 to go second.