Taufeeq Umar was dismissed on the last ball of the day as he and Azhar Ali guided Pakistan to 134 for two in reply to New Zealand’s 356 in the second Test in Wellington.

Both scored half centuries after Pakistan lost an early wicket before Taufeeq was caught in close by Martin Guptill off Daniel Vettori for 70.

Azhar was not out 62 at close on day two after he and Taufeeq had combined for a 132-run partnership following the early loss of Mohammad Hafeez for one, when he was given out caught by wicketkeeper Reece Young off Tim Southee to leave Pakistan reeling at 2-1.

Hafeez was unlucky to be given out as replays raised doubts as to whether he had hit the ball.

Taufeeq, however, was the beneficiary of not having the umpire review system in use during the series when he prodded forward to a sharply turning Vettori delivery and Young took a backhanded catch after juggling the ball four times.

Television replays showed he had got a large inside edge on to his pad before Young took the catch.

It was the sixth possible decision that could have been overturned by the review system, and while New Zealand captain Daniel Vettori said he would like to see the system in place, both teams just had to accept it was not being used.

“You just get on with it,” said Vettori, whose sixth Test century guided New Zealand to 356.

“I’ve tried to be consistent and say the referral system is good for cricket.

“I think 99 per cent of people think the same way. Its just a matter of convincing that one per cent.”

Vettori’s century was brought up amongst some tense moments In the second Test between the sides, at the Basin Reserve.

He resumed after lunch on 79 but accelerated his scoring rate when he lost Southee (one) in the first over after the break and had just Brent Arnel and Chris Martin to come.

The New Zealand captain was on 96 when Arnel was trapped in front for one by Umar Gul and tension rose as the crowd wondered if Vettori would achieve the milestone with Martin striding to the crease to face three deliveries.

Martin’s lack of prowess with the bat has attained cult status in New Zealand – he only scored his 100th Test run in his 60th match and 87th innings last week.

In the event he survived the three deliveries, even deflecting one to the boundary.

Vettori managed to sneak to 99 in the next over, leaving Martin to face one ball from Abdul Rehman, which he successfully defended to rapturous applause and Vettori tickled the first ball of Gul’s next over behind square to bring up his century.

He was eventually last man out, caught in the deep by Pakistani counterpart Misbah-ul-haq for 110 off Rehman.

“That’s Tommy’s (Martin) situation, he never lets anyone down. I was pretty confident,” Vettori added of Martin’s stoic defence that allowed him to reach three figures.

“You loosen up because with three wickets left you maybe don’t quite have that licence. As soon as Brent came out it was just have a crack and see what happens.” 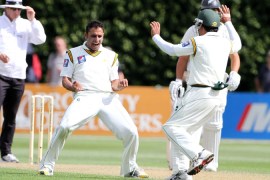 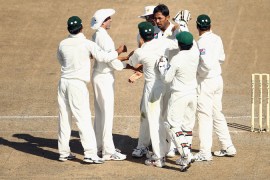 Pakistan race to win against NZ

New Zealand collapse at 110 in the second innings, setting the visitors a victory total of just 19 runs. 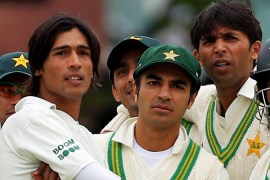