A spectacular lob from the half-way line by Ruben Cani helped Villarreal to a 4-2 victory over Osasuna to keep them in third place in the Spanish Primera Division.

Villarreal went into the game with several important players missing but Marco Ruben took advantage of a rare start with the opening goal.

Osasuna drew level from a corner with Krisztian Vadocz heading home but they were soon behind again when Cani spotted keeper Ricardo Lopez off his line and lofted the ball from the half-way line over his head.

In an exciting end-to-end game Joan Capdevila and Gonzalo Rodriguez scored further goals for Villarreal with substitute Javier Calleja finding the back of the net in between for the visitors.

Early goals from Javi Martinez and Iker Muniain set Athletic Bilbao up for a 2-1 victory over Racing Santander.

More clinical finishing from the home side proved the difference as Racing had plenty of possession but struggled in front of goal.

Pedro Munitis rounded keeper Gorka Iraizoz but shot over the cross bar while Kennedy hit the woodwork from 35 yards with a fine shot before Ivan Bolado earnt Racing a consolation.

Real Sociedad bounced back from four straight defeats with a convincing 4-0 win away to in-form Getafe.

Zaragoza came out on top 1-0 in the relegation scrap against Levante with Gabi Fernandez scoring the key goal while David Barral and Nacho Cases gave Sporting Gijon a 2-0 win over Hercules.

On Sunday, it is the turn of Malaga to face the champions Barcelona who are in imperious form and looking for a club record 28th straight game without defeat.

They equalled the previous record tally set in the 1974-75 season with a 5-0 Copa del Rey win over Real Betis where Lionel Messi once again stole the show with three goals but it could easily have been five.

Real Madrid remain on the shoulders of Barcelona but lack the fluidity and firepower of their rivals.

They are scouring the market for a goal scorer with Gonzalo Higuain a long term injury absentee, and may turn to a familiar face.

“There are lots of names being mentioned,” Mourinho told a news conference at the club’s Valdebebas training ground when asked about former Manchester United marksman Van Nistelrooy, 34.

“If in the end it’s Ruud I’ll be very happy,” added the ex-Chelsea coach. “We coincided in England and I know him well as a player and person.

“It would be very good for us to have another attacker because we don’t have many and we have a lot of matches to play.”

Van Nistelrooy said after scoring the winner in Hamburg’s 1-0 victory at Schalke 04 on Saturday he would have to mull over his next move.

“It’s not easy for me as it’s not just any club that is coming calling,” he was quoted as telling German media.

“Hopefully things will be sorted out soon. I can’t leave the lads in the lurch by having my head elsewhere. Real Madrid is the only club that could change my mind.” 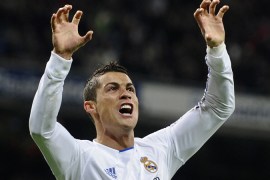 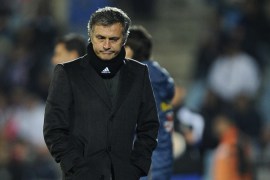 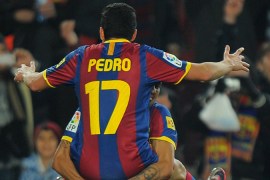 Pedro fills in for Messi

Spaniard gets both goals as Barcelona beat Levante 2-1 while Valencia leave it late to beat fifth-placed Espanyol. 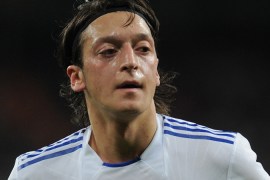 Ozil: ‘Barca can be caught’

Real Madrid’s German midfielder talks to Al Jazeera about his breakthrough year as he sets sights on Spanish title.