Reigning champions Iraq beat the United Arab Emirates 1-0 at the Asian Cup with an injury-time own goal to put them in a strong position to make the knockout rounds.

Iraq put themselves in a strong position to join their great rivals Iran in the quarter-finals after the unfortunate Walid Abbas turned the ball into his own goal in added time from a cross by Younis Mahmoud.

Iraq, who were unchanged from the team that lost 2-1 to Iran, had the better of the opening 20 minutes at the Al Rayyan Stadium in Qatar, without forcing keeper Majed Naser into action.

But it was UAE who had the first meaningful chance on goal, defender Hamdan Al Kamali leaping highest to crash the ball against the post from an inswinging corner in front of a disappointing crowd of just over 7,000.

And moments later they should have taken the lead when forward Ismaeil Matar nodded the ball on for strike partner Ahmed Khalil, but the 2009 Asian Young Player of the Year headed the ball well over from just inside the six-yard box.

Six minutes before the break Iraq had their best spell of the match when Nashat Akram crashed the ball against the bar with a towering header, then Qusay Muneer unleashed a drive that rattled the upright.

The second-half was again sluggish in getting going, but when it did, Iraq again looked the most likely to break the deadlock.

But defender Samal Saeed could only loop his header from the resulting kick well over, with both teams struggling to find their range.

Just past the hour it was UAE’s turn to hit the woodwork for a second time as Khalil’s blistering pile-driver smacked the bar.

Iraq then went straight up the other end and were denied a certain goal when Ala’a Abdulzehra’s header, which looked destined for the net, was deflected wide by Khalid Sebil for a corner.

With both sides badly needing the three points, they made a rash of substitutions to force the breakthrough.

On 79 minutes Saeed again went close for Iraq with another free header from a corner, but it flashed just wide, before that late unfortunate intervention.

In the last round of games, on Wednesday, UAE take on Iran and Iraq play North Korea. 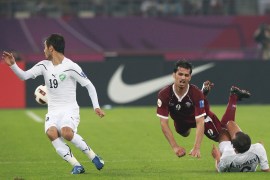 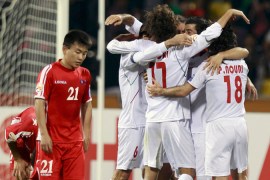 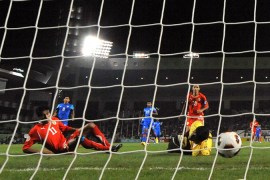