Rafael Nadal was bundled out of the Australian Open as his hopes of holding all four Grand Slam titles at once were ground into dust by fellow Spaniard David Ferrer.

The tearful top seed suffered a disappointing 6-4 6-2 6-3 loss, having not dropped a single set en route to the quarter-finals, as he attempted to become the first man since 1969 to achieve the record.

Spanish number two Ferrer goes on to face Andy Murray in the semi-finals having downed the world number one, who holds the French Open, Wimbledon and US Open titles.

In the women’s draw on Wednesday, Vera Zvonareva and Kim Clijsters both won to set up a semi-final showdown.

Nadal, who at times struggled against Marin Cilic in the previous round, looked to be suffering from injury as he was blown off the court by his lesser-known countryman.

Ferrer blasted winner after winner, and Nadal had no answer to his all-court game.

After exchanging early breaks in the first set, Nadal went off court to receive treatment for what appeared to be a hamstring injury.

Once he returned to the court, it was one-way traffic.

Nadal’s movement is a vital part of his game, and when it is compromised he can be severely exposed.

Ferrer took advantage of this comparative weakness to secure his second Grand Slam semi-final, after his 2007 US Open run.

He will face a sterner test in the form of 2010 runner-up Andy Murray, however, if he is to make his first final.

Despite Murray not being at his best, the fifth seed survived the bizarre shot-making of Alexandr Dolgopolov.

The Ukrainian has the most confusing forehand technique, but it has worked for him in the tournament so far, dumping the likes of Jo-Wilfred Tsonga and Robin Soderling out in earlier rounds.

Murray had yet to drop a set in the tournament, and after battling to win the first set, looked to be heading for a straight sets victory.

It was an impressive victory for the British number one, who looked out-of-sorts at times during the match.

“It was very tough. Every point against him is different, he hits the ball differently to everyone else, it’s tough to explain,” Murray said.

But the world number five will no doubt be grateful for a challenge before facing the big-hitting Ferrer.

Although their head-to-head favours the Spaniard 3-2, Murray’s victories have all come on hard courts, while Ferrer reigns on the clay.

Whatever the result, Ferrer has certainly woken the world of tennis to his impressive skill.

Vera Zvonareva continued her progression through the draw with a straightforward 6-2 6-4 win over Petra Kvitova.

The crafty left-hander had put paid to Sam Stosur and Flavia Panetta, but the 25th seed couldn’t reproduce her 2010 Wimbledon semi-final appearance.

Zvonareva had been renowned for her temperamental attitude on the court, often breaking into tears when behind in matches.

That now seems to be behind her, and she will be bidding to reach her third straight Grand Slam final on Thursday, as she takes on world number three Kim Clijsters.

Radwanska was given a “one per cent chance” of playing in this Australian Open by a surgeon, after suffering a stress fracture at the end of last year.

But an impressive performance saw her push Clijsters, who returned to the tour after retirement in 2009 by winning the US Open, to her limit.

It wasn’t a particularly engaging match, but the Belgian managed to edge through to the semi-final match with Zvonareva.

Arguably the best player on the tour, the world number three has been selective about the tournaments she has participated in since her return, and is still the favourite to win the tournament.

It is a rematch of the 2010 US Open final, which Clijsters dominated.

But Zvonareva won their last encounter, at the tour-ending WTA Championships in Doha – a title which Clijsters went on to win.

Nerves are likely to play a large factor in the match, with both suspected of cracking under pressure.

The winner will face either world number one Caroline Wozniacki, or ninth seed Li Na, who also play on Thursday.

The Chinese player is in the form of her life, and could spring an upset, but nobody is ready to call who can win the title.

In the men’s draw, the second and third seeds face off for a place in the final.

Defending champion Roger Federer, and 2008 winner Novak Djokovic play the night match, in what should be a thrilling encounter. 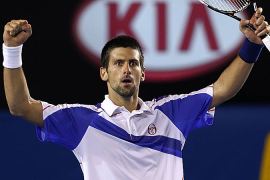 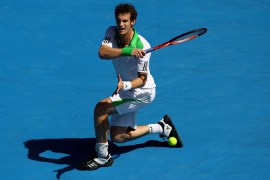 Scot looks every bit the contender as Nadal, Clijsters and Zvonareva also advance at the Australian Open. 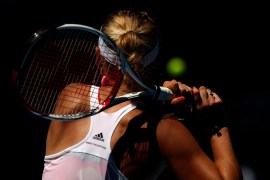 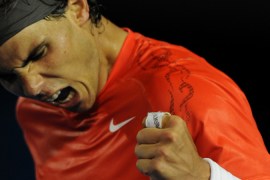