Dimitar Berbatov scored five goals as a rampant Manchester United stormed to the top of the English Premier League with a 7-1 win over Blackburn at Old Trafford on Saturday.

United moved three points clear of rivals Chelsea after Berbatov, eclipsing team mate Wayne Rooney in the England striker’s first league start since the beginning of October, broke his goal drought to become only the fourth player to score five goals in a Premier League match.

Chelsea can reclaim the lead at Newcastle United on Sunday. Earlier Arsenal had enjoyed a brief spell in first place after beating Aston Villa 4-2 in the day’s early match.

West Ham eased the pressure on boss Avram Grant and boosted their survival hopes with a 3-1 win over Wigan at Upton Park.

Unbeaten United now have 31 points from 15 games to Arsenal’s 29. Carlo Ancelotti’s misfiring Chelsea, who have lost three of their last four Premier League encounters, fell to third overall with 28 points from 14. City stay fourth on 26 points.

Berbatov wasted no time in getting his name on the scoresheet, taking his first from close range in the second minute and his second in the 27th. It was Berbatov’s first goal in 11 matches since his hat-trick against Liverpool in September.

Manager Sir Alex Ferguson was quick to praise Berbatov and the team effort.

“There was some great football attached to those goals and getting off the mark early I think helped him (Berbatov) because he hadn’t scored for 10 games,” he told Sky Sports.

“And that does prey on strikers’ minds because that’s the way they are.”

Berbatov’s fourth goal, again lashed in from close range, came in the 62nd and the fifth eight minutes later.

South Korean forward Park Ji-sung had made it 2-0 in the 23rd while Nani scored United’s fifth in the 48th with Blackburn, taken over this month by Indian poultry giant Venky’s, taking a roasting.

Arsenal got back on track at the end of a traumatic week.

The Gunners crashed 2-0 at Braga in the Champions League in midweek, just days after blowing a two-goal lead to lose 3-2 at home to north London rivals Tottenham.

Clark scored again from close-range in the 70th minute but Jack Wilshere sealed the points with a diving header in stoppage time. 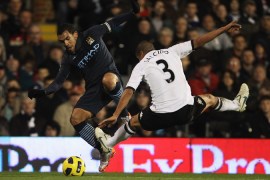 Tevez scores twice as Manchester City beat Fulham 4-1 and move back into the EPL title race. 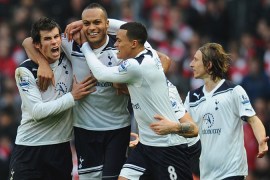 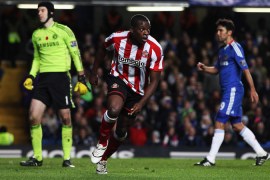