Andrew Strauss has delivered the perfect riposte to those questioning his place in England’s one-day team with a polished 126 to help his side to a four-wicket win over Pakistan in Leeds.

After Pakistan, hopeless in the Twenty/20 internationals, had scored a testing 294 for eight, England were always close to their near six an over target as they moved 2-0 up in the five-match series.

Captain Strauss was the backbone in Sundays’ game and though it proved a nervous finale after the opener departed with 47 runs still needed, Michael Yardy and Tim Bresnan brought England home with
three balls to spare.

Despite the defeat Pakistan will have been pleased with their display, not least in the field where they were much improved.

They also produced one of their best batting displays of their long tour of England after winning the toss in Leeds.

Kamran Akmal (74) and Mohammad Hafeez (43) built an opening stand of 122 in 23 overs with Akmal in particular punishing some loose England bowling with a slew of boundaries.

The assault was maintained by Mohammad Yousuf (46) and Asad Shafi, a late call-up for the tour who hit 50 from 57 balls, including one mighty straight six off spinner Graeme Swann, as England did not help their own cause with some poor fielding.

England set about the chase confidently and opener Steven Davis, who hit 87 in the first match of the series, started powerfully again with 26 off 21 balls before being caught behind off Shoaib Akhtar.

Strauss took up the mantle, bringing up his 50 with a big six off left-arm spinner Shahid Afridi and going along untroubled with Jonathan Trott until the number three was run out for 53 attempting an impossible single.

Strauss, dropped on 25 and lucky to escape an appeal for a catch behind the wicket, otherwise looked comfortable until he fell lbw trying to sweep Saeed Ajmal.

The wicket came after England had gone into their shell, the rate creeping up to 8.5 needed, and when big hitters Eoin Morgan and Ravi Bopara each fell for 16 it set up a tense last few overs.

However, Yardy (13 not out) and Bresnan (10 not out) kept their nerve to bring England home for a victory that lifted them to second, behind Australia, in the world one-day rankings.

“When you are chasing 290-odd you need one guy to bat the majority of the innings so the partnership with Trotty set things up pretty well and we just needed a decent finish,” Strauss told Sky Sports.

“I’m enjoying playing with a bit more freedom at the moment. There is a lot of confidence in the group and at the moment it’s good fun.”

The third match of the series is a day-nighter at The Oval on Friday. 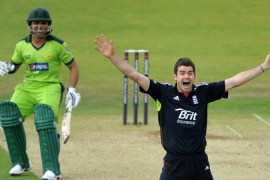 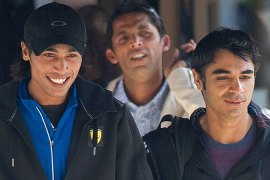 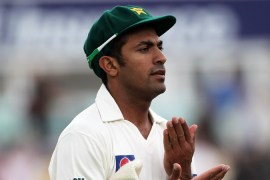 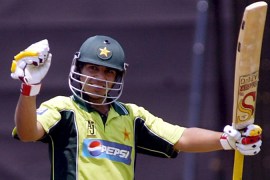