Bundesliga giants Schalke 04 have signed Dutch striker Klaas-Jan Huntelaar from Italian side AC Milan after the forward saw his strating prospects dim with the arrival of Zlatan Ibrahimovic in Italy.

The Dutch World Cup runner-up had been the subject of constant transfer speculation after struggling to nail down a starting place in his first season at the San Siro last term.

“Negotiations were tougher than expected. I am happy to have Klaas-Jan. He will help us,” Schalke coach Felix Magath told Bild newspaper early on Tuesday.

Schalke, playing in the European Champions League this season, have lost both their opening Bundesliga matches.

The 27-year-old, who played for four years at Ajax Amsterdam before moving to Real in 2009 where he also failed to establish himself, said on his website late on Monday he hoped the deal would go through before the end of the day.

“Klaas-Jan wants to continue his career at Schalke. Schalke and Milan have agreed on a transfer fee of about 13 million euros ($16.4 million),” he said.

“It is true I never wanted to leave Milan but that changed when Zlatan Ibrahimovic came from Barcelona.”

The 32-year-old striker was released from his contract with Serie A’s Juventus on Saturday after 10 years in Turin and moves to his wife’s hometown of Alicante.

“I wanted to play in Spain, I consider it an important step in my career,” Trezeguet said.

“My principle objective is to play, to prove my abilities here, and to bring my experience to a team that wants to grow.”

Trezeguet won the World Cup with France in 1998 and scored the golden-goal winner for his country in the final at Euro 2000.

Meanwhile Competing with three world champions for a place in the Barcelona midfield did not deter Javier Mascherano from sealing his move from Liverpool to Barcelona on Monday.

The Argentina midfielder will have to vie for playing time with Spain trio Xavi, Sergio Busquets and Andres Iniesta at the heart of Pep Guardiola’s side, after signing a four-year contract with the Spanish champions.

“It would be stupid to think I would come here and be playing every game,” Mascherano said at his presentation in the Nou Camp.

“You have to respect the people who are already doing well and who have won everything. In the positions I play in, there are three world champions.

“It will be a honour to be able learn from them and to grow with them.”

Barca’s sporting vice-president Josep Maria Bartomeu said the player had taken a pay cut to help complete the move, and said Mascherano’s arrival would be their last of the current transfer window.

The 26-year-old passed a medical earlier in the day before signing his contract, which has a buy-out clause of $114 million.

Spanish media reported he moved for around $28 million.

Mascherano became Barca’s third acquisition of the summer after Spain striker David Villa and Brazilian full back Adriano Correia, and he helps fill the gap left by Yaya Toure’s departure to Manchester City. 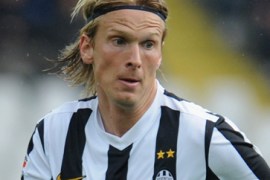