England swept a feeble Pakistan batting order aside to move within sight of a series victory after a spirited comeback in the fourth and final Test at Lord’s.

Pakistan were forced to follow on after collapsing to 74 all out on their first innings.

And a second collapse followed, with the visitors closing day three on 41 for four – still 331 behind England, who currently lead the series 2-1.

England, 102 for seven at one stage in their first innings on Friday, reached 446 all out after a world-record eighth-wicket partnership of 322 between Jonathan Trott, who made 184, and bowler Stuart Broad’s 169.

Trott, his concentration never faltering in more than nine hours at the crease, reached his 150 from the first ball he faced after play resumed on a crisp, sunny morning before a capacity crowd.

Broad stood tall to drive the ball with a full follow-through and took two boundaries in an over from Mohammad Asif as the pair moved serenely past the previous eighth-wicket record of 313 set by Pakistan’s Wasim Akram and Saqlain Mushtaq against Zimbabwe in 1996.

They looked like taking their team through to lunch without further loss when Broad was dismissed lbw missing a sweep against off-spinner Saeed Ajmal.

He had batted for six-and-a-half hours in the third-highest innings recorded by an England left-hander at Lord’s.

Trott, who drove firmly through the off-side and clipped the ball neatly off his legs, followed soon after the break when he was caught behind to give Wahab Riaz his first wicket of the match.

Bounding in from the Pavilion end, Broad dismissed Yasir Hameed for two then yorked Pakistan’s best batsman Mohammad Yousuf for a duck.

Captain Salman Butt stroked three boundaries off a Steven Finn over to give Pakistan a brief respite before the introduction of Graeme Swann sparked a terminal decline.

Swann immediately got the ball to grip and turn, bowling Butt for 26 with his first delivery after tea and capturing three more cheap wickets to finish Saturday with four for 12.

Finn, switching to the Pavilion end, found his length to finish with three for 38. P

akistan’s total was their second lowest against England following their 72 in the second Test at Edgbaston this year.

Following on, Pakistan lost both openers Imran Farhat and Hameed with the score still in single figures.

Butt again looked fluent and again punished Finn until he pushed forward to a straight delivery from Swann and was lbw for 21.

Yousuf followed for 10 without any addition to the score, when he lobbed Finn to Trott at deep square-leg.

As Yousuf was returning slowly to the Pavilion, a rain shower swept the ground and play was called off for the day. 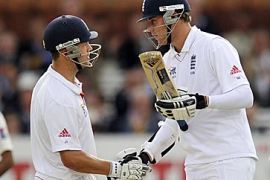 Trott and Broad tons save England