Kim Clijsters survived three match points before a rain break then produced a remarkable comeback after the weather cleared to beat Maria Sharapova 2-6 7-6 6-2 and win the Cincinnati Open.

Sharapova had three championship points at 5-3 in the second set before rain left her stranded at deuce, two points from victory, and ending up having 74 minutes to ponder the missed chances before play resumed.

Belgian Clijsters emerged from the break a different player, and steamrolled the Russian in the third set after winning the second set tiebreak from 3-0 down on Sunday.

“I think it certainly gave her time to relax, and more than the conditions themselves, I think it was about just maybe her going in and having a chance to think about what she needs to do differently,” said Sharapova, who took a medical time-out in the third set to treat a heel injury.

“She came out and started playing really good tennis.”

After holding serve following the rain-break, 27-year-old Clijsters broke Sharapova before holding again to take the game into a tiebreak.

She clawed her way back from the 3-0 deficit to take the tiebreak 7-4, and broke Sharapova in the third game of the final set when the Russian double-faulted.

The Belgian failed to win on three title points, but held her nerve in the end to secure a $350,000 prize and her 38th WTA win.

The victory was her fourth since returning to the sport after a two-year maternity break.

Clijsters returned to the tour at this event a year ago and went on to win the US Open, the Brisbane International and the Sony Ericsson Open in Miami.

“You can’t start a match when you come out of the locker room like that, you can’t start it at 0-0. You have to be ready to go and you have to get yourself a little bit pumped up and fired up. That’s what I tried to do,” she said. 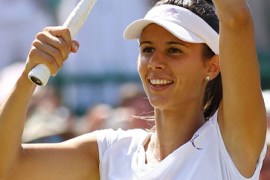 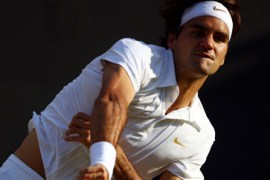 Too close for comfort

Al Jazeera’s Chris Tortise says Roger Federer will be spurred on by his Wimbledon scare. 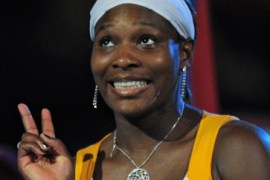 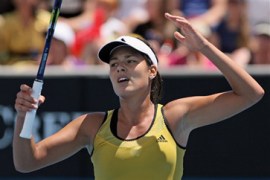