Kobe Bryant and Pau Gasol paced the Los Angeles attack in the fourth quarter as the Lakers rallied from a 13-point deficit to beat Boston Cetics 83-79 and capture their 16th NBA championship.

Bryant scored 23 points and Spain’s Gasol had 19 points and 18 rebounds for the Lakers who edged the Celtics in a defensive duel Thursday to take the series four games to three.

Forward Ron Artest finished with 20 points and five steals for the Lakers who beat the most decorated franchise in NBA history to capture their second-straight championship title.

“This is the sweetest,” said Bryant, who collected his fifth championship ring and was named MVP of the series.

“It is the sweetest because it is against them (Celtics) and it is the hardest one by far.”

It was a stunning turnaround from the first half for the Lakers in front of a boisterous crowd of 18,997 at Staples Center arena.

“We did it with perseverance,” said Lakers coach Phil Jackson who won his 11th NBA championship ring.

“I thought our defence was terrific. We were able to step in and play the kind of defence that we’ve established as kind of a calling for this team.”

Bryant and his teammates struggled in the first half. Bryant scored just eight points as the Celtics led by six points, 40-34, at the half and 57-53 heading into the fourth.

But the Lakers hung around long enough for Bryant to catch fire in the fourth quarter, sparking the offence outburst and dominating the rebounds under his own basket.

“Tonight it (pressure) got the best of me,” Bryant said of his early struggles.

“I wanted it so bad, sometimes you want something so bad it slips away from you.

“But my teammates picked me up and I can’t say enough about Spain (Gasol). That guy is unbelievable and we wouldn’t have won it without him.”

The win was sweet redemption for the Lakers who still had a bitter after taste following their humiliating 2008 finals loss to the Celtics.

But Bryant had more rebounds than Boston’s Ray Allen, Kevin Garnett and Rasheed Wallace combined. He finished with a game high 11 defensive rebounds as the Lakers outrebounded the Celtics 53-40 on the night.

“We just had to crash the boards,” Bryant said.

“Whoever won the rebounding in this series won each game. I wanted to get in there and grab as many as I could.”

Paul Pierce had 18 points and 10 rebounds and Kevin Garnett scored 17 points for the Celtics who kept it close right the final buzzer but couldn’t stop Bryant down the stretch.

“Someone has to lose and it sucks,” said Celtics forward Glen Davis.

Rajon Rondo finished with 14 points and 10 assists for the number four seeded Celtics who were trying to become biggest underdog NBA finals winner since the sixth seeded Houston captured the crown in 1995.

“It was a tough game for either team to lose.” said Celtic coach Doc Rivers.

“It was tough getting shots, both teams played great defence.

“I thought a lack of size at the end of the day was the difference.

“We are not going to be the same team next year so I told my guys I was proud of them.” 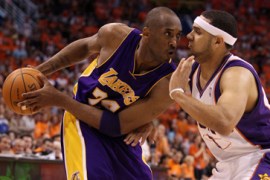 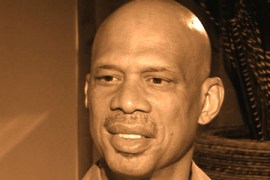 Riz speaks to the legendary basketball star about the challenges of achieving so much.